At first, as an entrenched fan, I felt special. Because, you see, I’d discovered Martin years earlier. He was my little secret. But, then it became clear that Martin wasn’t just a fad, wasn’t just a passing ghost of geekdom on the mainstream, he was a real thing. Maybe it was seeing Martin spoofed on Saturday Night Live, or when he was sitting there in the crowd at the Emmys, but finally it clicked with me. He’s not my secret anymore. Hell, he’s not even our secret anymore. Fantasy has a new ringleader, he wears a Greek sailor’s hat, thick glasses, and rides a wave of popularity the likes the genre hasn’t seen since The Lord of the Rings. 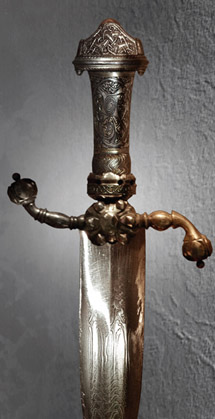 Expectation is something that Martin is familiar with. He openly struggled with the demons it raises, and it was a force that nearly crushed A Song of Ice and Fire as he struggled for nearly 11 years to rein in the chaos surfaced at the end of A Storm of Swords, producing during that time the two most criticized volumes in the series. This expectation doesn’t come simply from his ravenous fans, but from, among others, his publishers, the execs at HBO, the cable providers, and Martin himself. A Dance with Dragons came at a time in Martin’s career as a writer when his career as a pop-culture icon, or at least the creator of pop culture icons, was about to explode beyond the walls of Fantasy geekdom, where he’d been a darling for years, and, with shocking speed, become a factor with mainstream audiences. All of a sudden, it was cool to like George R.R. Martin, to discuss dragons and dwarfs around the water cooler. Everywhere you turned, whether they were old or young, socially ill-equipped or popular socialites, Martin’s books were rarely far from sight. Your mom was reading them. That kid behind the counter at the 7-11 was reading them. Martin’s rise to fame isn’t unprecedented, but it’s not hard to imagine how difficult it would be to stay afloat in the ocean of new fans, detractors, and critics. Fantasy fans are often a forgiving bunch (just look at the middle and later volumes of Jordan’s still-successful Wheel of Time series, for instance), but this wasn’t the average group of Fantasy fans anymore. I’m not sure that anyone, Martin, his publishers, his family and friends, were prepared to weather the storm.

So how can any novel live up to such expectations?

In a sense, it didn’t. It couldn’t. In the intervening years between A Feast for Crows and A Dance with Dragons, Martin’s audience grew so large and ravenous that anticipation levels were so dangerously high that, no matter what Martin did, he was bound to disappoint. A Storm of Swords was a climax novel, bringing many events from the first two volumes to a head and all the tension building over the first two novels unleashed itself in a bloody fury. Martin had a delightfully chaotic playground to play in, full of villainous soldiers, virtuous (and not so virutous) women, and righteous fools. Every storyline hit a climax at once… and A Feast for Crows and A Dance with Dragons, which are essentially one long novel split over two volumes, were left to pick up the pieces. Act two, if you will, in the longer work of A Song of Ice and Fire. Now, all stories need an act two (arguably), and Fantasy series are often plagued with ‘middle-book syndrome,’ in which the authors must move the pieces together, preparing for the third act and the climax. But, could there be a less compelling time for ravenous new fans to be anticipating a new volume in the series? They gobbled up the first four books, and then were met with the second half of the second act of a looooong series. From the perspective, it’s no surprise that the novel failed to meet the expectations of its fans, new or old.

Martin was free to write the first three volumes (and, it could be argued, the fourth as well) of his series in relative obscurity, without the weight of his legion breathing down his neck. How that affected the eventual quality of the release, if at all, will probably never be known. I was among those fans with heady expectations, and that same anticipation kept me from talking about the book, not trusting my own opinions after finally reading the novel after so long. Were my disappointments a reflection of the novel’s innate qualities and failures? Or because I wanted one thing, and was served another.

A year removed, I would argue that A Dance with Dragons is a good-to-great novel, and a poor-to-okay addition to A Song of Ice and Fire. Some of Martin’s best writing happens in A Dance with Dragons, from his improved prose, to Reek’s chilling character arc. Equally, some of Martin’s weakest writing happens here, like Dany’s insipid behaviour as she treads water, waiting for the rest of the world to catch up to her, or bloated descriptions of attire and banquets. Thirty years from now, however, a new reader will discover Martin’s series in a bookshop (or whatever passes for a bookshop, should they no longer exist) and she will devour the series, gobbling up all the goodness found in Martin’s seven (or eight) volumes. During the middle portions, she’ll hit something of a bit blip, her enthusiasm might wane, but she will push on, and reflect on that period as a necessary evil for the series, the first tip of the boulder that sets of the avalanche that happens in the following volumes. Or so I like to think. Hope.

[I]t’s flawed and fascinating, overlong, but dense with riveting relationships and a labyrinthine plot.

Was A Dance with Dragons the best novel last year? No, it wasn’t. Is it the best on the Hugo shortlist? No, it isn’t. Will I vote for it? No, my vote will go to Walton’s wonderful Among Others. But I think there’s an argument made, one that might be unfair to Grant, Corey, Walton and Mieville, that A Dance with Dragons is to George R.R. Martin as The Departed is to Martin Scorsese — it’s flawed and fascinating, overlong, but dense with riveting relationships and a labyrinthine plot — and, for an author robbed of a Hugo in 2001, when Harry Potter and the Goblet of Fire, one of the weaker volumes in J.K. Rowling’s equally enormous Harry Potter series, won ‘Best Novel,’ would it not seem just for Martin to finally get his hands on the Hugo he deserves by taking home the prize with one of his weaker volumes. Or maybe I am just too fond of irony.

Early in A Song of Ice and Fire, Tyrion Lannister says, “I have a tender spot in my heart for cripples and bastards and broken things.” And that so succinctly sums up my thoughts on this hulking mess of a book. As Tyrion is compared to Jaime, A Dance with Dragons appears broken against its older siblings, struggling to find its place in the series proper, but, when all is said and done, I think we will look back on it as a volume of transition, change and, most importantly, an ugly duckling that one day proves an important piece to Martin’s magnificent swan.

This article was first published in issue #319 of The Drink Tank, edited by Christopher J. Garcia and James Bacon.