If creating the magic system isn’t hard, what’s the difficult part then?

Making the magic matter. Arcane acorn bombs and fire-wielding fluffy tails are all well and good, but if the reader never gets beyond the “Oh, that’s kinda cool” reaction, something is wrong. 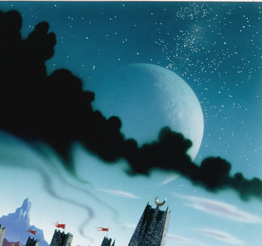 What, then, makes magic meaningful? It must be part of a tripod. No, not a War of the Worlds-style tripod. Let me clarify.

All three must be equally invested in and reliant on each other; otherwise, you end up with an off-balanced or toppled tripod. When working on a novel, I ask myself a number of questions regarding the balance of characters/plot/magic. They usually run along these lines:

If these questions are truly taken into account and addressed, magic can become much more than just a few nifty ideas cobbled together. Readers can be engaged by the magic because it’s intertwined with characters and events they care about, rather than sitting off in its own little corner, waiting to be called upon when the story demands.

If not, though, a magic system can devolve into a handful of glitter and a few golden stars stuck to the page, able to catch the reader’s eye but quickly revealed as little more than window dressing.

And, call me crazy, but I think most readers prefer books that don’t leave their clothes covered in glitter. My next guest post will research this vital issue further: Glitter-dispensing fantasy novels…yay or nay?

This concludes the emergency test of your magic system.