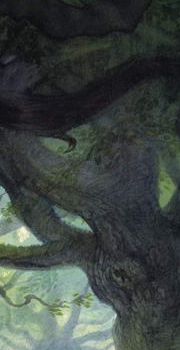 Recently, a listing appeared on Amazon.co.uk for a novel called ‘Fitz Fool 1 Hb’ by Robin Hobb. That title refers to the two characters at the center of her most popular novels, the Farseer trilogy and the Tawny Man trilogy, and had her most ardent fans all up in a tizzy about her potential return to their tale. Though she’s been writing in that setting for the last several years, those stories, notably The Rain Wilds Chronicles, are set far to the south of the Six Duchies, where fans first fell in love her world and characters, and both Fitz and the Fool have been long absent from her tales.

It looks like this is about to change, though Hobb is rightly upset that the news broke. Hobb, on her newsgroup:

With great reluctance, I am addressing this thread, as it simply won’t go away, I suppose.

The accidental listing on Amazon.co.uk is extremely premature. I’d say very extremely except that’s a misuse of adverbs. I’m not blaming anyone for being curious about what the listing means! I just wish it hadn’t happened at all.

Clearly, for some time, my publishers have wanted me to write a continuation of the Fitz and Fool story . It was my hope to work on such a story slowly, carefully and very privately. For years. Because if I do it badly or hastily, I will have ended my career.

But it’s out there now and there’s no dodging it.

I’m going to avoid posting about this. I’m not going to reply to any queries about it. Not because I’m trying to be a diva or an artiste, but because I need to focus on writing, not talking about writing. I think I’ve posted here before about what I see as the difference between Being a Writer and Writing. I’m not going to Be a Writer about this. There will be no hints, page counts, updates, teasers, or warnings that A Main Character Will Die! I know that many other writers use things like that to build excitement and increase internet chatter. But I don’t. For me, writing is like working on a long complicated math equation. If someone in the room is reciting phone numbers or saying the times table out loud, everything gets scrambled. So I’m going to insulate myself.

Fitz and the Fool are two of the most beloved Fantasy characters of the past twenty-plus years, and its understandable that Hobb wants to explore their stories privately, ensuring that they’re as good as they can possibly be, which takes time (just ask her friend, Mr. Martin). In the meantime, I hope that her fans can sit with proper patience and allow Ms. Hobb the time and energy she needs to finish the books to a standard she is happy with.