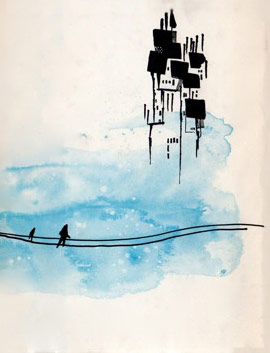 In the MMORPG I play, I have both female and male characters (which reflects my unclearly-gendered public author identity, though not purposely). I have had people assume I am a male playing a woman, but when playing a male character I have been asked whether I’m female. One elvish hunter said, while watching my avatar dance, “I hope ur a girl, man, because otherwise u r gay.” Which would be … bad? Women are expected to behave in one way – feminine, agreeable, dance-y – and men in another – laconic, assertive, definitely not dance-y. To vary from that ‘default’ is to raise questions.

My gay friend who plays MMORPGs says that in his experience, only the younger players care whether he’s homosexual, and there’s more concern expressed about whether he’s male or female. Why is it so important to establish the gender of a player in an MMORPG? Some people actually feel uncomfortable when they don’t know my gender, when I am just some random person who joined their PUG for ten minutes.

I think it is so that they know how to treat me. Generally, when I am playing a female character, the assumption is I am also female and other players are chatty with me. They take time to explain everything, talk about their lives, and ask advice about how to get their girlfriends to play. When I am playing a male character the chat is silent, except for an occasional “thanks, bro.”

It’s considered uncool – or “gay” – to play a female character when you’re male. I have had men confess to me (in my female character form) that they prefer to play women, but would I please not tell anyone else, because they don’t want their online acquaintances to be angry with them. Yes, angry. I suppose since male players tend to open up to women, they are caught off guard when that “woman” is actually a man. But why do they make the assumption? Quite a few men play with female avatars.

Others are not sure how to deal with me and are a bit squirrelly in communications, as if the not-knowing causes some discomfort.

Back to writing. People like to know, and in the absence of information will default to the most likely gender. Apparently for authors that is ‘male,’ and for me, assumptions vary between ‘straight’ and ‘gay’ and happily, not in a judgmental fashion. Some, a smaller number, figure I’m female. A surprising few have not made any assumption at all, and have asked instead. Others are not sure how to deal with me and are a bit squirrelly in communications, as if the not-knowing causes some discomfort.

So how does this affect how books are read?

On my blog I wrote about how book covers serve to immediately identify the type of book inside. An author’s name, indicating gender and background, may serve in the same way, bringing up their default gender expectations.

I have seen readers claim they don’t read books written by women because they’re too emotional, especially the male characters, which is unrealistic to them. Leaving aside the fact the most emotional people I have ever met are men, it’s likely not true. But female = melodrama, in these readers’ minds.
Then there is the opposite – there is a perception men can’t write decent women. However, I haven’t noticed anyone saying they won’t buy books for this reason. Many will choose male authors if they want more action and plottiness.

I have a confession. I tend to buy fantasy written by women. That’s because I expect more well-rounded characters in books that women have written. However, if asked to write down all my favourite characters, many of them would be written by men:

My belief that women write better characters is based on nothing more than a false impression, but it sticks. Just like those tests for which the word ‘yellow’ is written in red, and when asked what colour it is, we say ‘yellow’ – our brains trick us and they are not to be trusted. My advice to anyone who buys books based on ‘default’ gender assumptions is to stop it. You are probably wrong, and missing something.

To get back to the man who argued not to put homosexuals in a book unless it’s part of the plot: I have given a lot of thought to why I was so offended at the time. It’s because a gay character is real life. If I were to write a neighbourhood, it would be something like my real one, with lots of different people in it, of all different colours and religions, and gay, bi-, and straight as well. To eliminate them, and make my neighbourhood conform to some ‘default’ homogeneity, would be a lie. To me that is not real life, whatever any other reader might expect . I can’t try to imagine what some nameless reader is expecting; I can only write what feels real. That is my default.

And that goes to men and women too. Real men and women, with women who can lift things and men who cry, women who are unemotional and men who are conniving. Because there are all kinds of people, and they don’t all fit neatly into a slot. My pen name, for all the issues I have with it, reflects this fact. The word “woman” or “man” should not automatically conjure up an image. That’s what the writing is for – to create these characters, to give them breath and life and purpose beyond ordinary expectations. And that is what I aim to do.

Mazarkis Williams has degrees in history and physics, and a passion for cooking and cats. Mazarkis has roots in both Britain and America, having been educated and working in both, and now divides time between Bristol and Boston.