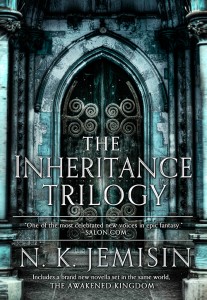 “A few old faves will appear, but for the most part this is a new story with new characters,” Jemisin said. “Shill is a true child god — unlike Sieh, who just played at childhood — and frankly I’m loving her; writing her basically means contemplating how a being with an adult-level intellect, Phenomenal Cosmic Power, and no freaking clue about anything blunders through complicated events.”

Jemisin also revealed the first blurb for the novella, which, if you’re sensitive to such things, contains spoilers for the Inheritance trilogy.

As the first new godling born in thousands of years — and the heir presumptive to Sieh the Trickster — Shill’s got big shoes to fill. She’s well on her way when she defies her parents and sneaks off to the mortal realm, which is no place for an impressionable young god. In short order she steals a demon’s grandchild, gets herself embroiled in a secret underground magical dance competition, and offends her oldest and most powerful sibling.

But for Eino, the young Darren man whom Shill has befriended, the god-child’s silly games are serious business. Trapped in an arranged marriage and prohibited from pursuing his dreams, he has had enough. He will choose his own fate, even if he must betray a friend in the process — and Shill might just have to grow up faster than she thinks.

“As the marketing text notes,” she continued. “A good chunk of the story will take place in Darr and focus on a young Darren man, in a society in which men have few rights and forced male circumcision is a thing — so still some Serious Stuff therein.”

In addition to The Awakened Kingdom, Jemisin also announced that Orbit Books will be publishing an omnibus edition of the Inheritance trilogy in print and eBook formats.

The Awakened Kingdom will be available on December 9th in eBook form.