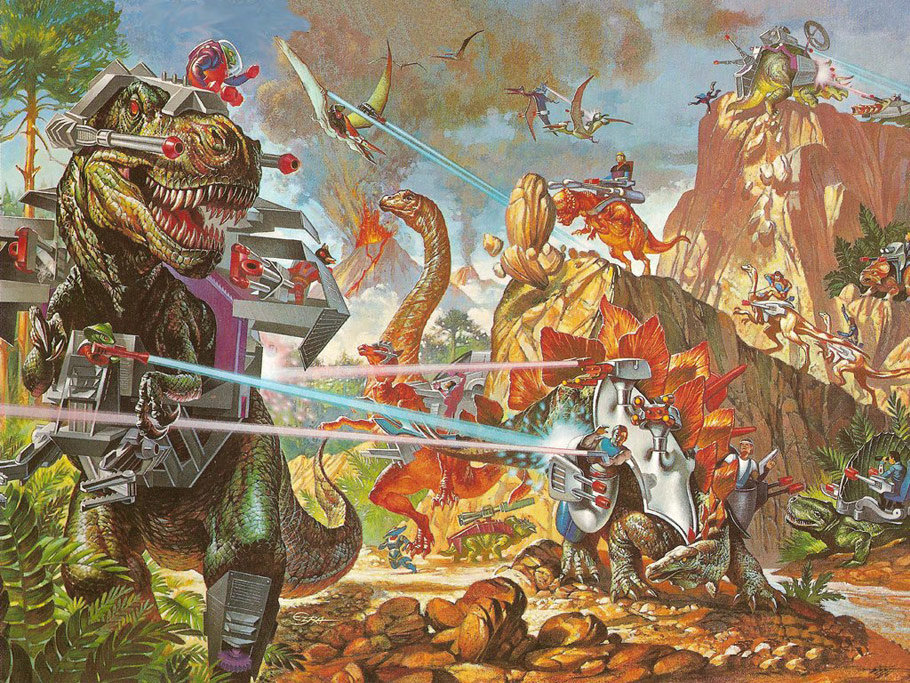 How cool is that image? It’s a bunch of dinosaurs equipped with laser beams and cockpits. Who cares if you have Dimetrodons and Pachycephalosaurus living in tandem? It’s dudes riding dinosaurs with lasers. Dino Riders was my Jesus as a kid. As a dino-obsessed youth, the idea of riding dinosaurs into battle was the thing of legends and far-off planets where anything was possible.

Today, Tor.com revealed not only 2014’s best cover, but also the winner of the 2016 Hugo Award for Best Novel: The Dinosaur Lords by Victor Milán. He and I might be a generation apart, but, in our love of dino steeds, Milán and I are clearly cut from the same cloth, and the legacy of Dino Riders is alive and well. 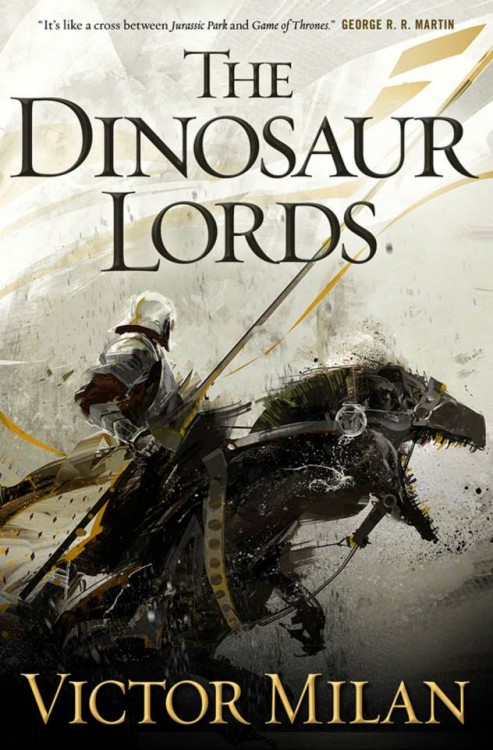 A world made by the Eight Creators on which to play out their games of passion and power, Paradise is a sprawling, diverse, often brutal place. Men and women live on Paradise as do dogs, cats, ferrets, goats, and horses. But dinosaurs predominate: wildlife, monsters, beasts of burden – and of war. Colossal planteaters like Brachiosaurus; terrifying meateaters like Allosaurus and the most feared of all, Tyrannosaurus rex. Giant lizards swim warm seas. Birds (some with teeth) share the sky with flying reptiles that range in size from batsized insectivores to majestic and deadly Dragons.

Thus we are plunged into Victor Milán’s splendidly weird world of The Dinosaur Lords, a place that for all purposes mirrors 14th century Europe with its dynastic rivalries, religious wars, and byzantine politics…and the weapons of choice are dinosaurs. Where we have vast armies of dinosaur-mounted knights engaged in battle. And during the course of one of these epic battles, the enigmatic mercenary Dinosaur Lord Karyl Bogomirsky is defeated through betrayal and left for dead. He wakes, naked, wounded, partially amnesiac – and hunted. And embarks upon a journey that will shake his world.

The idea that a human civilization could grow and evolve alongside dinosaurs (who, apparently, haven’t evolved in 65+ million years) is amazingly absurd. I love knights, I shamefully love faux-European secondary world fantasy, and I love dinosaurs. So, stick knights on dinosaurs and you’ve certainly got a winner. Right? In all seriousness, Richard Anderson knocked one out of the park again, delivering a cover that’s not only hit-you-over-the-head ballsy, but a beautiful cover in its own right. And, is that George R.R. Martin quote real? Who knows. I don’t even care.

The Dinosaur Lords is due for release in July 2015.