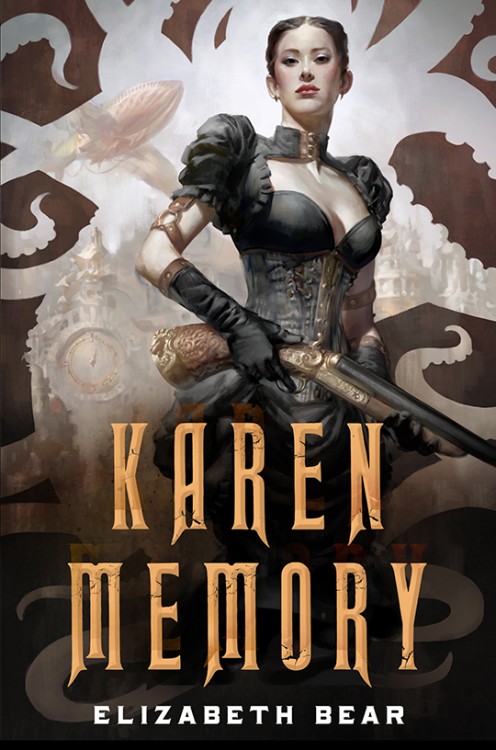 And, just look at that cover by Cynthia Sheppard! Cephalopods? Shotguns? Creamy Steampunk goodness? Checks all around.

The back cover copy is the perfect companion for the bold and beautiful cover:

Set in the late nineteenth century—in a city a lot like what we now call Seattle Underground—when airships plied the trade routes, would-be gold miners were reading to the gold fields of Alaska, and steam-powered mechanicals stalked the waterfront, Karen is a young woman on her own, is making the best of her orphaned state by working in Madame Damnable’s high-quality bordello. Through Karen’s eyes we get to know the other girls in the house—a resourceful group—and the poor and the powerful of the town.

Trouble erupts one night when a badly injured girl arrives at their door, begging sanctuary, followed by the man who holds her indenture, and who has a machine that can take over anyone’s mind and control their actions. And as if that wasn’t bad enough, the next night brings a body dumped in their rubbish heap—a streetwalker who has been brutally murdered.

Hard on the heels of that horrifying discovery comes a lawman who has been chasing this killer for months. Marshal Bass Reeves is closing in on his man, and he’s not about to reject any help he can get, even if it comes from girl who works in the Hôtel Mon Cheri.

Bear brings alive this Jack-the-Ripper yarn of the Old Steampunk West with a light touch in Karen’s own memorable voice, and a mesmerizing evocation of classic steam-powered science.

“Karen Memory was one of those books that was a long time in the making,” Bear told Tor.com when they revealed the cover today. “I wrote her first words — ‘You ain’t gonna like what I have to tell you, but I’m gonna tell you anyway.’ — in September of 2009, and I wrote the final words in January of 2014. In between, I lived with Karen’s voice in my head, because she was full of stories, and she wanted to tell them to anyone who would listen. And soon I get to share those stories with readers, which is one of the great thrills of my writing career!”

“[Karen Memory] is as amazing as I knew it would be,” said Beth Meacham, Bear’s editor at Tor Books. “But the problem was, how to get the cover for it right? Because Karen deserved nothing but the very best, and there were too many tempting scenes to illustrate. But this, this is perfect. This is Karen Memery, practical, spunky, a little sexy and a whole lot dangerous. In her own way.”

Karen Memory will hit store shelves and eReaders in February 2015.