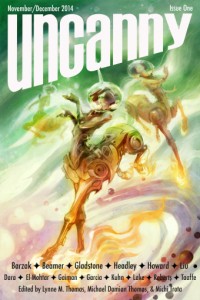 Uncanny launched via a very successful Kickstarter campaign, buoyed in part by Lynne and Michael’s previous successes, and also by a science fiction and fantasy community hungry for a new online magazine that focuses on the vast diversity and endless opportunities possible in speculative fiction. This early success gave Uncanny a leg up over similar magazines that have to start building an audience from scratch. “It gives Uncanny the ability to provide a whole year’s worth of the best fiction, poetry, and nonfiction we can find,” Michael said. “Over 1,000 people believed in us enough to fund this project. We owe it to them to make it the best possible magazine that we can. We have a lot of goodwill right now; it’s time to deliver.”

Over one thousand backers believed that Lynne and Michael Damian Thomas had the pedigree to launch one of the most ambitious magazines in recent memory, immediately joining the ranks of Hugo Award winners such as Lightspeed and Clarkesworld as top flight publishers of genre fiction and non-fiction. And for good reason: Uncanny is a new magazine, but the editorial staff behind it is anything but.

If people have enjoyed what we’ve done previously, we hope that they will enjoy this even more, as we’ve added space unicorns. Which are awesome.

“We believe we bring all the lessons we’ve learned from previous projects to the table,” Michael told me when I asked what their editorial history brought to the new magazine. “Uncanny is the culmination of the ‘Dig’ books that Lynne and Michael worked on, Apex Magazine, and our work on Glitter & Mayhem. It has elements of all of these things in its DNA. If people have enjoyed what we’ve done previously, we hope that they will enjoy this even more, as we’ve added space unicorns. Which are awesome.”

But it’s not just Lynne and Michael that make things happen at Uncanny. “We are also blessed with an experienced staff,” Lynne said. “Michi Trota, our managing editor, brings a lot of editorial knowledge and enthusiasm. Erika Ensign and Steven Schapansky are veteran podcasters who bring a lot of technical knowledge and creative ideas, and Deborah Stanish is a deeply experienced interviewer and podcaster. Amal El-Mohtar’s skills as a reader are just glorious.”

The editorial and support staff bring a lot of experience to Uncanny, but their vision for the magazine is fluid and evolving, and its voice is still forming.

“What’s a typical Uncanny story look like?” I asked.

“We don’t quite have a ‘typical’ Uncanny story just yet,” said Lynne. “In fact, we’ve been amused at authors on social media saying, “That’s not an Uncanny story,” about potential submissions before the first issue is out! However, if you’re looking for the general tone of Uncanny, the stories by Christopher Barzak, Rachel Swirsky, Maria Dahvana Headley, Kat Howard, and Amal El-Mohtar from Glitter & Mayhem probably are the most reflective. They have gorgeous prose, weirdness, strong characterization, and haunt you after you’ve finished reading them.”

Though the Kickstarter campaign had specific goals to launch the magazine and support it for a year of publication, the editors have a vision for a much longer future. “We don’t want this to be a one year project, or something that we have to Kickstart every year,” they revealed. “Our goals are financial sustainability, and finding the largest possible number of readers for these amazing works. We’re so proud of what we’ve already purchased, and we want everyone to read these pieces and love them as much as we do. We look forward to finding and sharing phenomenal voices from across the planet with our readers.”