“Bannerless” is something of a prequel to an earlier story of mine, “Amaryllis,” which was nominated for a Hugo in 2011. In almost the first line of “Amaryllis,” the narrator wonders about her mother and why would have tried to go through with an unauthorized pregnancy. “Bannerless” is the answer to that question. I’ve been wanting to tackle this story for a long time, based on the premise that the answer isn’t what anyone would have expected.

I loved the world-building detail of the banners, so small a part of the story, but so rich—what was the inspiration?

It’s a detail that carried over from the first story, so I don’t entirely remember the exact reasoning behind it. But people love trophies. Abstract rewards are all well and good, but a thing that people can display and be proud of, concrete representation of an accomplishment, is an idea that’s been around as long as civilization. This is a world where people need to earn the right to have children, and the banner has become something of a merit badge to show off to the world that accomplishment. For a simple agrarian society like this, a piece of cloth—a flag—is an inexpensive and effective way to show off.

Why does the complex, imperfect resolution of the case cause Enid to change her mind about retirement?

I think this case reminds her that it isn’t about the entire society, it isn’t even necessarily about enforcing the rules—it’s about helping one person. Aren puts a face on the work Enid’s been doing, and I think that inspires her.

Which post-apocalyptic story/ies left the greatest impression on you?

A Canticle for Leibowitz by Walter M. Miller for sure. In fact, I imagine that’s a big inspiration for these stories—it’s about what society saves from before, what new society they have to build to carry on. As a child of the last gasp of the Cold War, all the nuclear apocalypse movies and stories from the early 1980’s—everything from “The Day After” to “Threads” to “Mad Max” to “Red Dawn” have all stayed with me as well.

The last book in the Kitty series, Kitty Saves the World, is due out in August. That’s the big one! I also have the usual round of short stories and other projects lined up. Check out my website for news. 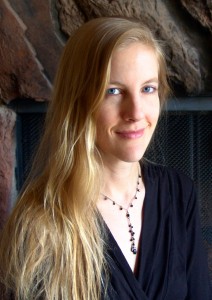 Carrie Vaughn is the author of the New York Times bestselling series of novels about a werewolf named Kitty, the most recent installment of which is Kitty Saves the World. She’s written several other contemporary fantasy and young adult novels, as well as upwards of 80 short stories. She’s a contributor to the Wild Cards series of shared world superhero books edited by George R. R. Martin and a graduate of the Odyssey Fantasy Writing Workshop. An Air Force brat, she survived her nomadic childhood and managed to put down roots in Boulder, Colorado. Visit her at carrievaughn.com.