Interview with Hugh Howey about “In the Woods”

“In the Woods” opens with a sense of mystery and confusion, almost a rebirth for the main character April. What inspired such a tense opening?

It’s a nod to the beginning of the second novel in the Wool trilogy. Here we have a survivor from the old world entering a new and much darker one. To me, that’s what apocalyptic fiction is all about: What would it feel like to be dropped into a hostile place where survival from day to day was a real ordeal?

April wakes after a long period of time. Did you need to conduct any additional research into how this kind of sleep might be conducted?

There is real progress being made on forced hibernation. Tests are being performed on lab rats, with the hope of human trials in the near future. NASA is looking into this for long space missions, so we might see science fiction become science fact in a generation or two. It will raise some interesting questions: Would you volunteer to be put into hibernation? We might not be able to travel into the past, but for our grandchildren, the chance to travel into the future might be a very real possibility.

April is a complex, sympathetic character that has developed over time. We feel for her, her confusion, her annoyance with her sister, her love for her husband. However, as the story progresses the reader might need to re-evaluate their feelings. Were you surprised at how she progressed through the stories, or was this the path you’d planned for April all along?

This was always her path. She was meant to collide with Juliette, the heroine from the Wool series. Too often, great heroes have ignoble ends. We don’t all get the perfect climax and the bow on stage that we see in much of fiction.

This is your third story in the Apocalypse Triptych series. Can you tell me a little how these stories relate to each other, and to the ongoing ‘Wool’ Silo series universe?

In Wool, I explored a world where humans are managed by layers of bureaucracy. These may be thrillers, but there’s satire at the heart of them. With this triptych, I wanted to touch on how often our blame is misplaced, and how we hurt the wrong people, and hurt ourselves by lashing out. It’s often the case that systems are to blame, and the people in them are performing no worse than we might. Innocents are hurt as innocence is lost.

I was pleased to see you as the editor on the Apocalypse Triptych series. Is this your first time editing an anthology? Can you tell us a little about it?

It was. I had no idea what I was getting into, and I hope I didn’t muck it up too much. John Joseph ran the idea by me at a conference a few years ago, and I loved the concept. I have a lot of experience with editing my own work and critiquing work in writing groups, but it was terribly daunting to offer suggestions to writers whom I admire. I don’t know how John Joseph does this for a living. It’s intense. And at the end: Incredibly rewarding.

Can you remind us what’s next for you and for your readers?

I’m working on a sequel to Sand. I’m also in the final stages of moving aboard a sailboat to sail around the world. Be nice to see the joint before the zombies, aliens, and meteors have their way with her. 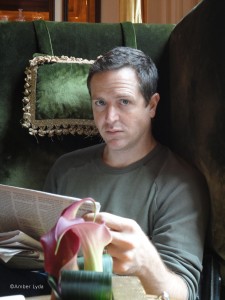 Hugh Howey is the author of the acclaimed post-apocalyptic novel Wool, which became a sudden success in 2011. Originally self-published as a series of novelettes, the Wool omnibus is frequently the #1 bestselling book on Amazon.com and is a New York Times and USA TODAY bestseller. The book was also optioned for film by Ridley Scott, and is now available in print from major publishers all over the world. Hugh’s other books include Shift, Dust, Sand, the Molly Fyde series, The Hurricane, Half Way Home, The Plagiarist, and I, Zombie. Hugh lives in Jupiter, Florida with his wife Amber and his dog Bella. Find him on Twitter @hughhowey.