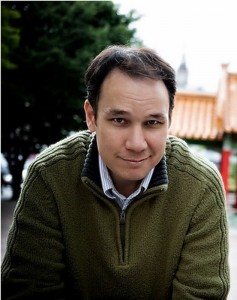 It’s a fine line between full-on, David Koresh crazy, and a perma-tanned, toupee-wearing host on QVC. I mean––you never know how much of their own bullshit they actually believe. It’s this weird balance of vanity and madness. So it was interesting to try and put myself in that headspace where ego (for a while anyway) can supersede reality.

You blend elements of steampunk, alternate history, and the metaphysical into a fully realized world. Using Seattle only serves to enrich the telling. Why did you happen to select the Seattle underground as your setting?

Seattle is a relatively young city, and by that I mean, there are still some secret places left. I have a friend whose family owns a building in Chinatown that’s been boarded up for decades and there’s an old opium den inside (that was shut down in the 40s). I love that.

The Seattle Underground is another one of those funky places with a colorful past.

Phineas is far from a sympathetic character, yet he embraces many of the characteristics of the wily trickster figure popular in myth and legend, one who teaches invaluable lessons while falling prey to his own cleverness at the same time. What is it about such trickster figures that appeals to readers? Is it the satisfaction of “come-uppance” at the end of the story, or something more?

I once worked with a guy who was brilliant, but he lived in a VW bus that he would park at the beach. He never repaid his student loans (and had no intention to), he didn’t have a bank account, he didn’t pay taxes, and he drank vodka like it was Kool-Aid. Basically, he lived on the margins of polite society. And he was so much fun to hang out with!

There’s something charming (and enlightening) about someone who breaks the rules so easily, because doing so makes us see the bars of a societal cage that we didn’t even know was there. But, deep down, he was also kind of despicable. So there was also the slow-motion train wreck aspect of his life. And who doesn’t like a good train wreck?

What comes to mind when you think of the end of the world? What is the Apocalypse to Jamie Ford?

For me, the Apocalypse is the fulfillment of the ultimate “I told you so.” Because whatever doom befalls us—super-plague, global warming, economic meltdown, nuclear war, alien invasion, techno-singularity—whatever it is, there will be a some crazy (or not so crazy) person who will be able to say, “See, you should have listened, dumbass.”

On your website you mention your great-grandfather Min Chung, who later changed his name to William Ford. How much do you rely on your Chinese heritage when it comes to telling your stories? Is it a case of “writing what you know?”

I often say that my writing career began when I wrote my parent’s obituaries. Because after my dad passed away (he was full-Chinese and spoke Cantonese fluently), I felt cut off from that side of my heritage. So, at the moment, exploring Asian history and culture is what interests me the most. Plus, traditionally, there hasn’t been much diversity in SF&F (unless you count elves, dwarves, and hobbit-folk).

What’s next for Jamie Ford? What do readers have to look forward to when it comes to new works?

The book that’s with my editor at the moment is about a boy who was raffled off at the 1909 World’s Fair. No one knows whatever happened to this kid, so I’ve made up his life story. And I’m gathering research materials for a gaslamp fantasy set in Chinatown, circa 1890. Oh, and maybe I’ll schedule a nap. A nap would be lovely.

Jamie Ford is the great grandson of Nevada mining pioneer Min Chung, who emigrated from Kaiping, China, to San Francisco in 1865, where he adopted the western name “Ford,” thus confusing countless generations. His debut novel, Hotel on the Corner of Bitter and Sweet, spent two years on the New York Times bestseller list and went on to win the 2010 Asian/Pacific American Award for Literature. His work has been translated into 32 languages. Jamie is still holding out for Klingon (because that’s when you know you’ve made it). He can be found at www.jamieford.com blogging about his new book, Songs of Willow Frost, and also on Twitter @jamieford.