Interview with Nancy Kress about “Blessings”

“Blessings” shows two sides of an alien invasion—an apocalypse for some, a new life for others. What elements of the story did you focus on while writing this third triptych piece?

“Blessings” follows the previous two stories in this series, carrying my “apocalypse” forward another few generations. When I started the first story, I wanted to write about a different apocalypse from the usual, so I chose this: an incident that makes everyone nicer. Less aggressive, biologically incapable of violence. That raised questions: How could such a thing come about? Who would desire it? I knew from before I began that aliens wished to remake us, and that genetic alteration of the entire world was the way they could do it.

This third story was thus free to explore how such an experiment ends. The aliens have succeeded—but only temporarily. Regression to the mean is a real, inescapable biological phenomenon (which is why children of Nobel winners don’t also win Nobels). Human beings have had millions of years in which they were biologically hierarchal and—yes—violent under the right circumstances, which vary from person to person. Violence is, unfortunately, a survival trait. It reappears, despite the Dant. And as with all human change, some gain and some lose. To me, that’s reality, and any good fiction must reflect that reality.

The story claims the aliens—the Dant—”remade us.” Yet they cannot be talked to. What was the driving idea behind the presence of the Dant?

The shifting points-of-view show that this is not your average apocalypse. What about apocalyptic fiction appeals to you? Why do you think we come back to this genre so often?

Any apocalypse involves tension and conflict. Since those are the engines of fiction, it’s not surprising that writers like to write such stories. I think readers like them for the same reason—plus a certain comfortable, once-removed frisson: “At least I’m not in the middle of that situation!”

The ending to is—perhaps surprisingly—a hopeful one. What makes a good ending, in your opinion?

Ambiguity. Life is seldom black-or-white, and I don’t think fiction should be, either. I want to see endings in which there are both gains and losses—sometimes for different characters, sometimes both for the same character. In addition, I like an ending to imply something true about the human condition (see “regression to the mean,” above).

I just finished a new science fiction novel, tentatively titled Triple Point. Next, I will write short stories for a while, as I usually do when finishing a novel. Change of pace is refreshing! 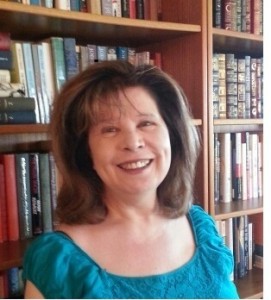 Nancy Kress is the author of thirty-two books, including twenty-five novels, four collections of short stories, and three books on writing. Her work has won five Nebulas, two Hugos, a Sturgeon, and the John W. Campbell Memorial Award. Most recent works are Yesterday’s Kin (Tachyon, 2014) and the forthcoming Best of Nancy Kress (Subterranean, Autumn 2015). In addition to writing, Kress often teaches at various venues around the country and abroad; in 2008 she was the Picador visiting lecturer at the University of Leipzig. Kress lives in Seattle with her husband, writer Jack Skillingstead, and Cosette, the world’s most spoiled toy poodle.