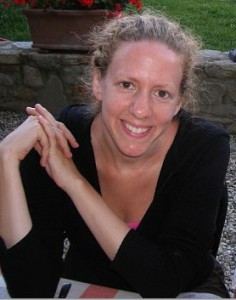 No, I didn’t need to do much research–I went to Hebrew school all through my childhood, so these Bible stories are pretty much embedded in my subconscious. I actually didn’t set out to echo the Abraham/Isaac story in the first story–I only knew that I wanted to create something that would, eventually, form a religious origin story that would somehow be retold in the final story. (That story was originally titled “Midrash,” which is the Hebrew word for a collection of stories that, over the centuries, were extrapolated/intepreted from the text of the Old Testament. From the start, I imagined stories #1 and #2 as a kind of Midrash for the civilization of story #3.) It was only once I had the initial concept in place, and was honing in on the father-son relationship at the heart of it, that I realized I was working with a story that had already been told.

The characters seem to dance around the Cain and Abel story until finally, instead of Thomas and Joseph taking the roles, Isaac decides it is his story. Were you surprised at how the story turned at the end to both fratricide and patricide, or had you planned it all along?

I actually followed a trajectory similar to the one that Isaac follows in the story, sifting through the various bible stories that deal with fathers and sons and brothers — and there are so many! — before finally realizing this was a story of Cain and Abel, at least in part. Of course, some of the fun of this story, at least I hope, comes from the fact that Isaac is so confused and mistaken about what’s happening around him, and the question of whether he’s interpreting everything wrong, or whether his senility allows him to see things more clearly than everyone else. He thinks he’s playing out Cain and Abel, but actually the emotional thrust of the story–again, I hope–comes from his manipulation of his sons, his over-reliance on the Isaac/Jacob/Esau narrative, and the ways his projection of these tropes blinds him to who his sons really are. (The unreliability of Isaac’s narration is also what we have to thank for the lack of women in this story–he registers their existence but, as could be said for the Bible as well, sees them less as historical actors than as incubators or succubi.)

Isaac has many mostly silent epiphanies, and it is hard not to empathize with how trapped he is in his old body. Did you spend time with elderly people in order to draw this part of Isaac so intuitively?

For some reason (well, actually it’s for a number of reasons that I could put my finger on, but would take a much longer explanation than I have space for here), I spent a lot of my teenage years writing stories about the elderly, issues of physical decline and encroaching senility, the relationships between younger people and their aging loved ones, and the distance that can grow between them, from resentment or discomfort or guilt. As an adult writer, I’ve spent most of my career writing young adult novels, which, obviously doesn’t allow for much exploration of the experience of aging. So for me, this was a refreshing return to a favorite theme.

I will say that I don’t think it takes that much of an imaginative leap to write about people aging–we all have elderly people in our lives, whether it’s close relatives or the guy sitting across the room at the coffee shop–I think the imaginative leap, which most of us put a lot of desperate energy into taking, comes from pretending that we will never be one of them.

I’m a little heartbroken that you describe his sons as “twisted”–you really think they’re so bad? (Think about their childhood!) Whatever happens beyond the bounds of the page is, obviously, up to each reader to decide for him or herself, but personally, I see a bright future for these people who–unlike Isaac–haven’t been warped by their time in the compound and aren’t weighed down by the grief of a lost world. Remember, Isaac is unreliable: Like all of us, he sees what he wants to see. One thing he sees accurately, I think, is these survivors’ need to bury the past in the past. Once Isaac is gone, once their religion can become a body of interpretable stories, rather than a living, breathing body telling them what to do, anything can happen.

What was the biggest challenge in writing this story?

I probably shouldn’t admit this, but for me the biggest challenge was…writing a story about the apocalypse. As you may have noticed, the first two stories do pretty much everything they can to avoid dealing with traditional apocalyptic happenings. There’s a reason that the second story, the one ostensibly set during the apocalypse, spends most of its wordcount talking about the pre-apocalyptic past. I didn’t want to write a disaster movie, I didn’t want to write a survival story, and I certainly didn’t want to have to create an entirely new post-apocalyptic civilization. I especially intimidated by that last one, but in this third story, there was simply no way to avoid it!

It was also challenging, in a fun way, to figure out how to do these characters and this world justice. I’ve fallen a little in love with this world, over the course of writing these three stories, and I wanted to give them a fitting send-off. As I said, from the very beginning I knew that I wanted the content of the first two stories to become a basis of the religious beliefs of the third story, I just wasn’t quite sure how to do it. Maybe because Isaac is more object than subject in the first two stories, it took me a long time to realize that he was the heart of the triptych, that together these were the stories of his life and its tragedy. Once I got there, everything else followed.

What are you working on now?

I’m diving into the revisions on Girls on Fire, my first novel for adults. It’s set in the early 90s, in the dawn of grunge and the twilight of the Satanic Panic, which means lots of Nirvana, Doc Martens, flannel, and more than a little devil worship. Suffice to say, I’m having fun.

Robin Wasserman is the author of The Waking Dark, The Book of Blood and Shadow, the Cold Awakening Trilogy, Hacking Harvard, and the Seven Deadly Sins series, which was adapted into a popular television miniseries. Her essays and short fiction have appeared in several anthologies as well as The Atlantic and The New York Times. A former children’s book editor, she is on the faculty of the low-residency MFA program at Southern New Hampshire University. She lives and writes (and frequently procrastinates) in Brooklyn, New York. Find out more about her at robinwasserman.com or follow her on Twitter @robinwasserman.