Allen Unwin first published Professor Tolkien in Great Britain in hardbound. At the time, copyright law in the USA protected up to 2000 unbound copies of a book to be imported as loose pages, to be bound and sold by a US firm. Houghton Mifflin handled Tolkien this way, in routine partnership with Allen Unwin. Nobody paid much attention, though Ian and Betty Ballantine loved the story and offered for paperback rights. Professor Tolkien declined, avoiding what he considered a tacky American edition. Over a period of ten years, when the British edition underwent reprint, repeated lots of unbound sheets of were brought in and sold by Houghton Mifflin in quiet obscurity. Enter a certain paperback publisher’s back room lawyers, who tracked publication records, trolling for the loophole that titles compiling more than the allotted 2,000 loose sheets slid into the public domain. On that legal technicality, Tolkien’s Lord of the Rings was reprinted as the very lurid paperback professor Tolkien had wished to avoid, and worse, with no royalties owed to the author.

The press scandal put Tolkien’s face on Time magazine, and public furor over the professor’s predicament changed in the law

The Ballantines seized on the opportunity, offered Tolkien a paperback contract with advance and royalties, then launched a campaign to expose that copyright clause as unethical.  The press scandal put Tolkien’s face on Time magazine, and public furor over the professor’s predicament changed in the law, closing the loophole forever. Betty Ballantine acknowledged this as the impetus that shot Tolkien’s works from obscurity to widespread awareness. The original Ballantine paperbacks have a green box on the back cover, asking readers to favour the edition that paid the author a legitimate royalty.

No question, Tolkien’s works are an undisputed classic, time tested in defining the modern fantasy genre. Yet without the exposure on national news, could his influence have broken out to seed an explosive phenomenon? 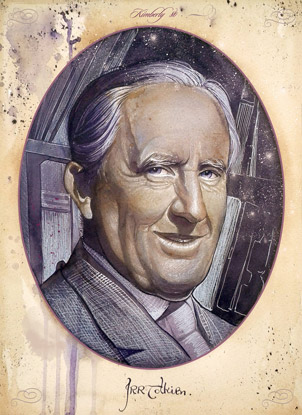 The landslide aftershock saw fantasy titles with deepest complexity, particularly those by authors who did not jump start their careers by miming Tolkien, all but buried. Jane Johnson, UK editor at HarperCollins arose as a champion of fantasy portraying adult protagonists and mature concepts. She launched Megan Lindholm (now Robin Hobb), bought Guy Gavriel Kay’s Tigana, published Barbara Hambly, Katherine Kerr, and was the acquiring editor for my Wars of Light and Shadow series, as well as the visionary launching Mark Lawrence. Her tenacity spearheaded the change from pictorial covers to graphic design, in belief adult fantasy could appeal to a wider audience. She became a signature player in GRR Martin’s launch, and this interview highlights the slow burn history of A Song of Ice and Fire, spanning a decade or more, in a battle to keep a trend setting fantasy in print long enough to realize its potential. Jane’s best ammunition became the overwhelming size of the advance. The publisher had to persist, reissuing with new covers again and again to keep the books fresh, or eat the loss.

Why during this period did so many excellent female authors change their bylines?

What made Martin’s work, and the evident literate quality of Kay such an uphill push? Why during this period did so many excellent female authors change their bylines, mid-career, and why did some truly excellent titles with adult protagonists fall under the radar entirely? (Authors like Matthew Woodring Stover, Lee and Miller’s Liaden books, Rosemary Kirstein’s Steerswoman series – the list is long and in some cases, still sorrowfully unlamented).

Rising costs and the collapse of the independent distributors took their industry toll in the nineties, but more than these, the insidious effect of computer tracking drastically shortened the time span for new work to establish itself. Instant access to sales figures let publishers and chains cherry-pick, ditching the effort required to build a slow burn approach, and enabling a quick shift toward immediate sales. One editor summed up the result rather baldly: buy up cheap books by new talent, throw the debut books at the wall like spaghetti, see what sticks, discard the rest.

The list of talent flushed swept away in this period includes a stunning array of talent: often the casualties were mature stories, written with adult protagonists.

Mergers swept the industry. Multi-national corporate outlook demanded higher profit margins, (double in fact, the expectations before) and still faster returns, driven by the Harvard business model. Johnson’s, and others, championing of sophisticated works with low volume sales became harder. Judicious editors could no longer acquire without  a profit and loss statement ahead, detailing the numbers of projected return. Works that needed longer to catch audience, that did not follow the trend, dropped out or all but disappeared. Signal works, renowned today, hit such a wall: Steven Erikson’s Malazan had an early debut in the USA, was abandoned by the original publisher, and remained available only in the UK, until a re-launch a decade later reintroduced him to the marketplace. Malazan’s first readers were few and scattered, and no matter how enthusiastic, the buzz over simpler, coming of age quests incited the numbers. A work now lauded for extreme complexity and adult almost passed by the wayside. 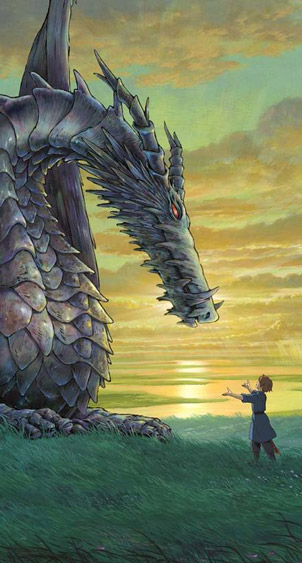 Art from Tales from Earthsea

More traditional fantasy series became engineered by high profile campaigns: the publisher of the notable major gave away free copies in mind boggling quantity, an unprecedented gamble to jump start sales figures. Several others were awarded enormous advances. To recoup investment, books were (and are still) rigged by means of what is called ‘co-pay’ – a kickback paid to the chains ensures that title is featured face out, on an end-cap or new release shelf. A notable case had a launch display covering the entire front of a major chain. A publisher could stake out a book’s visibility to build momentum, aimed at a ready audience.

Enter the question: has the freewheeling outreach of the internet actually made it easier for readers to find groundbreaking books? Could a slow burn break through title still miss?

Word of mouth is still the best strategy, but – for a work to crawl out of obscurity, how does the buzz reach a book?

Giveaways and deep discounts and features offered by online sellers have entered the fray. With instantaneous sales tracking feedback, and search algorithms, the rapid dissemination of information favours what people are talking about. Word of mouth is still the best strategy, but – for a work to crawl out of obscurity, how does the buzz reach a book? Friends read what friends know about. Social media trends concentrate what is already ‘discovered’ whether seeded by hype or mass volume. Major publishers recently gathered to survey industry change. They determined internet sales became driven by people shopping what they already knew. Books  already talked about, books already ‘discovered.’ Not long back, a blog post contributed to by about ten name writers, discussed how they sorted independently published titles for the better books – every last one relied on SOMEBODY ELSE having read and recommended the title to set it apart.

Browsing an unknown book on the internet requires the foresight that it is there! More, public opinion shoves the book’s data right into your face: ratings, reviews, numbers – crowd opinion leads the barrage. A few bloggers have readily admitted they cover titles that are talked about to increase likely traffic and commentary. Mention of titles outside the popular mainstream are few and scattered, and no matter how enthusiastic – amid the chorus,  does the ‘slow burn’ visionary sort of book actually capture its potential niche?

Internet buzz over books that ‘take’ quickly drive numbers, and computer tracking tells a publisher, in real time, what is taking off – the downside risk: authors that don’t hit this accelerated trending get dropped, faster than ever before. Would the slow burn, underground game changer that caught on in the course of a decade later happen as readily now?

While readers continue to browse at used book shops, the unseen curve becomes more insidious. Many excellent books launched without hype, the low advance/small press run title that turned out to be a great book became keepers – these gems seldom to never reach a charity shop. The available selection is already stuffed with huge press runs, re-circulated again and again, and worse, unknown books recycled precisely because they offered nothing special. Once, that Megan Lindholm debut, or that Guy Gavriel Kay standalone, or even, that George R.R. Martin book that failed to surface here. Libraries may seem an ideal alternative, except the small press run, the groundbreaking idea may never have been printed in hardbound, and even if so, the library budget would trade the low profile book for one with high demand. 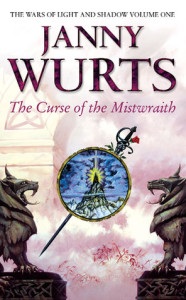 Buy Curse of the Mistwraith by Janny Wurts: Book/eBook

Do the drivers behind social media even recognize maverick gold? Given the runaway influence of trending influences on the internet, could the next Malazan, the next Tolkien, the next Martin or Hobb or  Kay be overlooked because slow burn books may lurk in obscurity for that decade or more? Can books with no budget survive the curve and can today’s editor walking cutthroat line of corporate profits, or the small press with tight purse strings, stay the distance where the early numbers don’t rack up? Does internet discourse help or hinder slow burn word of mouth, or is it feeding the mindset of sheep?

If social media works, and if e books are the great leveller, why are some authors, (like Carol Berg) writing sophisticated prose with adult protagonists pursuing the gray complexities  of flawed moralities not climbing to the top of the charts? Why isn’t the stylistic brilliance and dark tone of Karin Lowachee’s The Gaslight Dogs read as widely as Lawrence’s Prince of Thorns?

Janny Wurts is the author of eighteen books, twenty nine short stories, and the internationally best selling Empire trilogy written in collaboration with Raymond E. Feist. Through her combined talents as a writer/illustrator, Janny endeavors to create a seamless interface between words and pictures. The book cover images, both in the US and in most translations abroad, are her own paintings reflecting her vision of characters and setting. She lives in Florida in a state of creative havoc with a husband, two Bengal cats, three horses, and a back yard likely to be visited by wildlife, bagpipers, and sword bearing reenactors for period black powder demonstrations.