Though also an author of several science fiction novels (Jaran, for instance, might be considered as Genghis Khan meets Jane Austen in space!), Elliott is best known for being one of the cornerstones of epic fantasy writing starting in the mid 90s and continuing strongly to this day. While many of the innovations and style of Elliott’s rising carries through all of her work, the series’ themselves are individual and distinct in manner, matter, and tone. There is a Kate Elliott fantasy series for nearly every taste of reader. 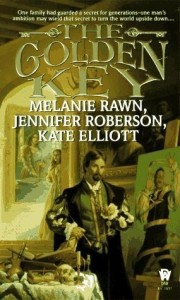 The Golden Key features a unique spin on the clever and powerful influence art has over the world’s magic.

The Golden Key, co-written with Melanie Rawn and Jennifer Roberson, combines their various talents to write a story over three time periods in a Medieval Spain-like setting. The early to mid ’90s was an intense time of such fantasy collaborations, with authors working together to bring their strengths and skills together to make a work equal to, if not better, than any of their considerable individual talents. Elliott is responsible for the third and final section of the novel. The Golden Key features a unique spin on the clever and powerful influence art has over the world’s magic. The story focuses on the sweep and tragedy of a central figure seeking desperately to hold onto the power and influence he has so carefully built up over so long, even as the world changes beyond his control. The Golden Key rightfully garnered a 1997 World Fantasy Award nomination.

The Crown of Stars series, perhaps Elliott’s best known work, starts with the aforementioned King’s Dragon and continues through seven volumes. Crown of Stars in some ways is the most traditional of her epic fantasy. Readers are dropped into a dynastic struggle in a secondary fantasy world reminiscent of 10th century Western Europe. Add in invasion from the north by a humanoid race, the Eika, accompanied by their equally unnatural dogs. Focus the story on two young main protagonists come into their power, destiny and heritage. Bake and serve. And yet within all that, Elliott includes points of view from all walks of life in her meticulously researched medieval fantasy world. Crown of Stars showcases fascinating worldbuilding and the creation of a secondary world with many interesting and clever aspects highlighted, including a church with a far more egalitarian power structure between men and women. As a just reward for readers, the series builds to a thundering climax that leaves the world changed — distinctly different than at the beginning of the tale.

The Crossroads trilogy begins with Spirit Gate. Set in the world of the Hundred, Elliott explores terrains, cultures and ideas far beyond the Great Wall of Europe. A complex, meaty story of a darkness spreading over the world, and the action packed struggles of those tasked to face it, will or no. The novels also illuminate, explore and debate ideas not always looked at in epic fantasy. Corruption and the nature of power and politics. Complicated moralities, religious freedom, and the role of women in society. Most of all, before the recent fascination with ‘grimdark’, the Crossroads series unflinchingly shows us the fate of ordinary people caught between contending powers, and what they are willing to do in response to such injustices heaped upon them. And did I mention the Reeves, the sheriff-like dispensers of law throughout the Hundred? They are carried to their duties, and to meet the threats to the Hundred by eagles. Giant Eagles. And they are far from cuddly.

An icepunk world where mages with cold aspected magic feud with the builders of airships.

Spiritwalker, her latest series, kicks things off with Cold Magic and continues Elliott’s experimentation and development as a writer. Unusually for epic fantasy, the series is a strictly first person fantasy adventure narrative. Trained in a House of spies, Cat Barahal and her cousin Bee make their way in an alternate 19th century Regency era world, much more glaciated and colder than ours, where Rome and Carthage continue to contend with each other. An icepunk world where mages with cold aspected magic feud with the builders of airships. A world where revolution against old orders and powers is in the air. A world where the spirit realm, and its Wild Hunt, and sleeping dragons, is terribly near. And did I mention the trolls? Not the kind you’re probably thinking. These trolls are feathered, intelligent, inquisitive descendents of dinosaurs, Troodons to be precise. Like in the Crossroads novels, and in Crown of Stars, the Spiritwalker novels, in the midst of its action and adventure, is willing to engage, explore and interrogate interesting and underexplored concepts in its epic fantasy context.

The Very Best of Kate Elliott collects her shorter fiction, with delightful cover art by Hugo winner Julie Dillon. Elliott’s short fiction is full of dense nuggets of worldbuilding and character, and often provides new and novel perspectives on the worlds of her fantasy novels. 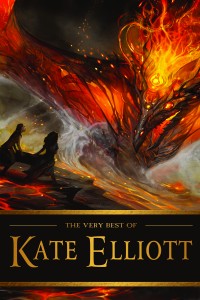 Court of Fives marks Elliott’s entry into a subgenre new to her — Young Adult — and looks to be yet another mark of innovation and growth in Elliott’s work. Court of Fives is set in a Greco-Roman Egypt-inspired world, a social setup reminiscent of Little Women, and a plot inspired by The Count of Monte Cristo. Court of Fives marks a furtherance of her experimentation with first person narrative.

And lest you think Kate is even taking a breather from writing the epic fantasy she has mastered and is so well known for, Black Wolves returns us to the world of the Hundred. Black Wolves, set sometime after the events of the previous Crossworlds series and can be read independently of the novels, features a set of protagonists that bear no resemblance to your 13 year old farmboys with a cosmic destiny that you can find on the clearance rack of bog standard epic fantasy. And yes, the Reeves and their Eagles are back!

There is no better time than now to become acquainted with Kate Elliott’s wonderful worlds and I look forward to enjoying the perspective, voice, and talent she brings to epic fantasy for years to come.