When I turned in the manuscript to book one of my epic fantasy series, he proceeded to tell me we should shelve it, and that I should focus on my thriller ideas, which he said he liked very much. I think my brow pinched in confusion. I’d just finished a book. He could go market it. Sell it. Make a commission. But I saluted and went off to write the thriller books that I was also eager to write.

Years later, it became clear that his motivation—with me, anyway—was less about my career, and more about his own. He was deliberately trying to build diversity into his author list. I can’t blame him for his business strategy, but not at the expense of what might be best for me.

I started submitting to agents again. This time, I was using my most recent work. The thrillers. I love these books. Got some good interest, too. In fact, one agent—the one I ultimately landed—said, “These are wonderful, very Dickensian. But . . .”

Dan Brown’s The Da Vinci Code was dominating the universe at the time, and he didn’t feel we’d be well positioned. So, he turned me down. Checking his client list, I saw one fantasy writer. One. But hell, what does it hurt to ask. “I have an epic fantasy,” I said. “Would you like to see it?”

“Yes,” he said. So I sent it. He liked it. He took me on. He sent it to Tom Doherty. I had a book contract before I knew it. For a ten year old manuscript.

Now, while I was off writing other books, my mind had continued to turn on the fantasy. As my craft was (hopefully) improving through workshops and reading and lots of writing, my thoughts on how to approach my notion for the epic fantasy had evolved. When I got paired with an editor . . . well, let’s just say not all writers and editors are a perfect match. That’s no one’s fault. It happens. I’ve since learned, from talking to lots of pros who are much further down the writer career path than I am, that a writer and editor sharing the same vision for a book series makes all the difference.

Anyway, I saluted again, and off we went with the original manuscript. That version of The Unremembered was published in 2011.

Since then, a few things have happened. First, work. By day, I’m a marketer for Xbox at Microsoft. It’s not a nine to five gig. And I’ve had several stretches (months at a time) where my writing time (3:30 a.m. to 6:30 a.m.) has had to be used for the day job. Priorities, don’t you know.

This latter bit, fortunately, led to an editor change. A good one. And once she and I got talking, and once she’d been in to what they call “launch” meetings with the publisher and sales team, we decided the best thing to do was an Author’s Edition of The Unremembered. An edition much closer to what I’d wanted to do after spending those ten years writing books and thinking about the series.

Now, I was also afforded the chance to weave in some new bits—since I’d now written book two, Trial of Intentions. Who wouldn’t take that opportunity?

Do I think this new Author’s Edition is going to sell a million copies? That would be nice. But what I can say is that this edition is nearer to my original intent. And that intent was to start an epic fantasy series with some familiar stuff, and then evolve it toward what I believe I’m doing that’s unique. I’ve compared this to placing a crab (in this case, the reader) in a pot of room-temperature water, then slowly turning up the heat. Get you boiling before you know it. 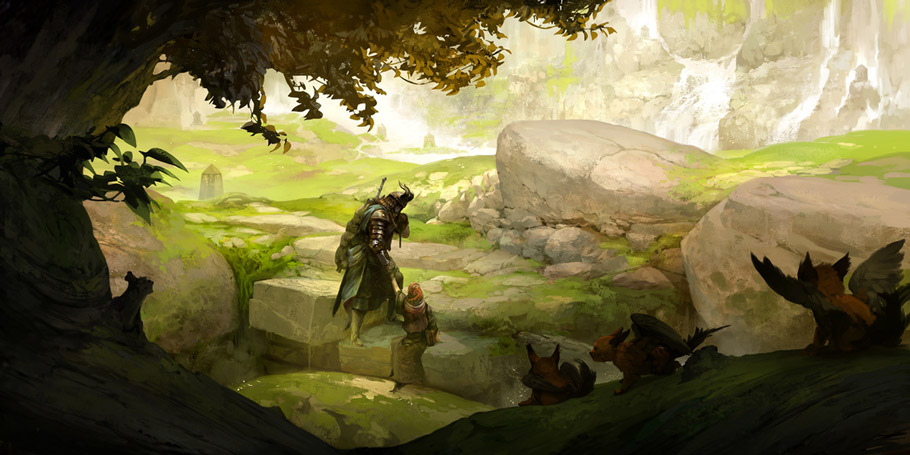 Idealistic as it sounds, I want to introduce more readers to fantasy.

We can debate if my notion was a good one, of course? For my part, I was thinking of book one as what you sometimes hear referred to as “gateway fiction.” Gateway books serve as an accessible entry point to a genre, precisely because it trades on things familiar. Idealistic as it sounds, I want to introduce more readers to fantasy.

Because I think fantasy does some things better than other genres. For example, it seems to me that fantasy can deal with issues in a way contemporary fiction can’t. A second-world fantasy has a level of remove that makes dealing with sensitive topics less polarizing. Readers will consider viewpoints that in a real-world setting might invoke an immediate bias.

But also, fantasy deals in wonder. There’s precious little of that. Good for people to reawaken that sense, if you ask me. So, what then, of Trial of Intentions? Well, this is where that pot of water I was talking about really gets to boiling. The familiar stuff gets turned on its head, so to speak.

Like, if you think one of my characters is an orphan farm boy…think again. In fact, imagine something kind of the polar opposite. This is some of what you’ll find in Trial of Intentions. A friend of mine, Ty Franck, calls it a deconstruction of fantasy tropes. He might be right, but “deconstruction” isn’t my intent. It’s more trying to take the reader someplace my own.

For example, in Trial of Intentions, there’s a major plot thread that trades on science. An entire society of science, with colleges of astronomy, physics, mathematics, cosmology, and philosophy. In fact, one of my main characters decides—against the endless escalation toward conflict—to enlist their help to try and avert war before it begins. I call it a Succession of Arguments. There’s still some mortal danger and threat. Intense battles. But there are also characters using investigative techniques and applied thought and debate to try and answer hard questions.

And, of course, I go deep on the music magic. In fact, what readers learn in Trial of Intentions is that I’ve set up something I call: governing dynamics. I had this idea to create something akin to our world’s mechanical laws, e.g. magnetism, gravity. In my world I call it: Resonance.

Resonance underlies—so far—five magic systems in my world. I posit that this principle of Resonance would fuel many magic systems that would take various forms, since different cultures would tap and manipulate the principle differently.

So, while the magic systems appear different, readers realize that they’re all operating on Resonance.

And chief among these in Trial of Intentions is the music magic. I’m a musician, so maybe this makes sense. But don’t get too comfortable. This isn’t lullabies and sweet soprano airs. I create something I call a dysphonic technique for my main character who possesses this ability. Think Morgan Rose and his backing vocals for Sevendust. Or David Draiman from Disturbed.

Not always, mind you. But often this is aggressive vocal music. It’s filled with raw emotion. It’s combative. It’s driven by intent, quite above lyrics and melody.

And then there’s motivation. More raw stuff. It was always the case that suicide was a part of my world. I’ve created difficult circumstances for some of the peoples in my series. For instance, there’s a barren place known as The Scar, home to castoffs whose parents no longer want them. Not all of them survive. Those that don’t, die at their own hands, the mental and emotional weight of their lives growing too much.

In Trial of Intentions, this becomes a deep-seated motivation for a few of my characters who work through the aftermath of having people close to them make this choice. I think it gives those plot threads an emotional center.

And I’ll tell you that I had a friend recently make this choice. I thought I’d worked through it okay. Stages of grief. But in going back over Trial of Intentions once it was done, I could see that it had gotten into the words. The book isn’t about this, but I can’t deny its influence, either. 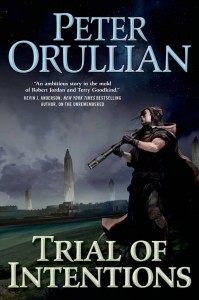 I should add, that since there’ve been four years between the original edition of The Unremembered and Trial of Intentions—and not knowing I’d get the opportunity to release an Author’s Edition of book one—I wrote Trial of Intentions as an entry point to the series. So, if you want to just jump in with Trial of Intentions, you’re good to go. I figured, given the time lapse, this made sense.

So, that’s the story. Fifteen years. A fledgling writer with the idea of wanting to draw new readers to a genre he loves. Some challenges along the way. Trials, if you will. The chance to put out the first book again, this time more in line with how I’d wanted to execute my idea in 2011. And a second book in the series, Trial of Intentions, where so much of what I’d dreamed about finally hits the page, and hopefully takes readers to new places.

And not crazy at all.

Peter Orullian has worked in marketing at Xbox for nearly a decade, most recently leading the music and entertainment marketing strategy for Xbox LIVE, and has toured as a featured vocalist internationally at major music festivals. He has published several short stories in addition to The Unremembered and Trial of Intentions. He lives in Seattle.