When I turned in the manuscript to book one of my epic fantasy series, he proceeded to tell me we should shelve it, and that I should focus on my thriller ideas, which he said he liked very much. I think my brow pinched in confusion. I’d just finished a book. He could go market it. Sell it. Make a commission. But I saluted and went off to write the thriller books that I was also eager to write. END_OF_DOCUMENT_TOKEN_TO_BE_REPLACED 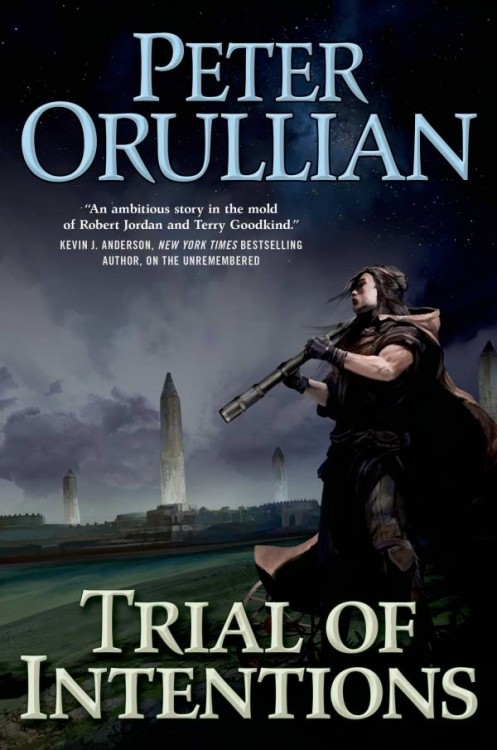 I’m a big fan of Kotaki’s (he’s even written for A Dribble of Ink!), but there’s something here that doesn’t quite work for me. I miss Kotaki’s usual sense of energy and action, or the intricacies of his armour design and landscapes. The cover for Trial of Intentions is static and ponderous, and lacks for wonder, which is something I never thought I’d say of Kotaki’s work.

The gods who created this world have abandoned it. In their mercy, however, they chained the rogue god—and the monstrous creatures he created to plague mortalkind—in the vast and inhospitable wasteland of the Bourne. The magical Veil that contains them has protected humankind for millennia and the monsters are little more than tales told to frighten children. But the Veil has become weak and creatures of Nightmare have come through. To fight them, the races of men must form a great alliance to try and stop the creatures.

But there is dissent. One king won’t answer the call, his pride blinding him even to the poison in his own court. Another would see Convocation fail for his own political advantage. And still others believe Convocation is not enough. Some turn to the talents of the Sheason, who can shape the very essence of the world to their will. But their order is divided, on the brink of collapse.

Tahn Junell remembers friends who despaired in a place left barren by war. One of the few who have actually faced the unspeakable horde in battle, Tahn sees something else at work and wonders about the nature of the creatures on the other side of the Veil. He chooses to go to a place of his youth, a place of science, daring to think he can find a way to prevent slaughter, prevent war.

What’s more exciting, though, are the plans that Tor and Orullian are cooking up for the relaunch of this series. Trial of Intentions is the follow-up to Orullian’s 2001 debut, The Unremembered. Five years later, he’s returning with an author’s preferred edition of The Unremembered, one that better matches the vision he had for the series from the get go (snafu’d by a labyrinthine journey through the politics of book publishing and editorial authority), and by all accounts is more streamlined, easier to sink into, and more focused on introducing readers to the series without overwhelming them with a tidal wave of world building.

The “Author’s Definitive Edition” of The Unremembered arrives on April 7th, 2015, with Trial of Intentions following on May 26th, 2015.