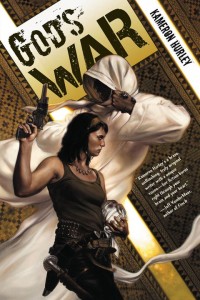 Beginning with Paolo Bacigalupi’s The Windup Girl three years ago, Night Shade Books has made a concerted effort to produce meaningful debut novels. 2011 was a bold year in that regard. God’s War by Kameron Hurley, subsequently nominated for a Nebula Award, was the mother ship of that movement. It’s the kind of novel that plants a flag, making a statement about the deficiencies of genre fiction and challenging societal perceptions as a matter of course.

Nyxnissa is a bounty hunter. She’s rather good at her job, mostly because she manages to chop off the heads of anyone dumb enough to get in her way. She’s got an unlucky team around her, headlined by the not so talented magician, Rhys, whose good looks and steady hands make up for his deficiencies. Once a government sponsored bel dame (assassin), Nyx has been down her luck for a while when she’s called before the Nasheen Queen to hunt down an alien who might have access to genetic technology that could end the never ending war between Chenja and Nasheen. Of course, her team isn’t the only one looking. Conflict ensues.

What makes God’s War such an accomplishment has little to do with plot. It is, in fact, somewhat of a failure as a narrative. The novel is littered with disjointed blanks that demand filling and the first fifty pages are more of a novella than the opening to a novel. Other details, like why Nyx’s team is so loyal to her and the relationships between Nyx and the various arms of the government, lack an equal amount of lucidity. What rescues the novel is Hurley’s unremitting authentic voice, the sheer audacity of her ideas, and brilliantly conceived and executed characters.

Hurley sets her story in the battle line between two nations with competing theological perspectives (both of which “feel” a lot like Islam). They’ve been been at war for generations and all men are required to serve at the front. In Nasheen, those who refuse are hunted down, killed, and their head’s turned in,

She waited until the strength bled out of him, then began to saw at the neck with her stolen knife. For a stretch of time while she cut off Arran’s head, she wasn’t a bel dame at all–just another body hacker, another organ stealer, another black trader of red goods. The only difference was, when she brought this boy in, her sisters would forgive her. Her sisters would redeem her.

This brutality created in Nasheen a matriarchal society. Men have become second class citizens, although little evidence is offered as to why these changes might have occurred, particularly considering that women are given equally limited choices — fight or breed. In Chenja, similar requirements exist, but society has developed far more along traditional lines with men very much in charge and women existing in gender degraded(?) roles. Other nations are extant, but interstitial, lacking a spotlight into their undercurrents.

Umayma, the planet on which this all takes place, is as anathema to human life as the war itself. Cancer is rampant among those lacking the means to prevent it and ethnic minorities are discarded. But for a very brief scene in the middle pages, God’s War never takes us to war itself. There’s a purpose there, in that the focus instead is the war at home – those who come back broken and those who were never allowed to go. It inverts the tropes of weeping women, waiting to find out who lives and dies. The home front isn’t sentimental, it’s uncompromising, horrifying, and believable insofar as how society devolves when life no longer has meaning.

Overwhelming in its raw honesty.

It’s an odd mix of technology and magic that Hurley deploys with firearms, cars, spacecraft, and wireless communication juxtaposed with psychically controlled bugs. It calls to mind Arthur C. Clarke’s third law, “any sufficiently advanced technology is indistinguishable from magic.” Although I despise the term slipstream, it seems fairly appropriate here, as Hurley’s ‘bugpunk’ trends far more magical than otherwise. These elements, combined with the unapologetic world, and aggressive gender politics, make God’s War something of a trend setter, much in the way that China Mieville’s Perdido Street Station and The Windup Girl became zeitgeists over time.

Into this wildly imaginative space, Hurley executes a narrative voice that’s overwhelming in its raw honesty.

I use you all, she thought bitterly. I use you and then I cut you out like a cancer, like my womb. . . but they were still there, sticky and hot in her dreams, like the detritus of a butcher’s shop, memories of blood and sand. 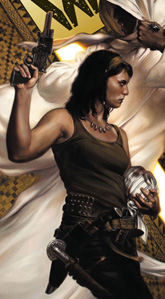 There’s an aggression to her prose that even in its sweet or tame moments comes off slightly confrontational. Reading Hurley often results in frequent breaks, a pause to digest a horrific act of violence or more likely to ward off a moment of hopelessness.

Ideas and voice, but I must not forget Hurley’s characters, namely the aforementioned Rhys and Nyx. The plot flows their struggle to survive, not only the war-torn world around them, but ultimately, their relationship with each other. God’s War isn’t a story about how individuals from different backgrounds come together to win, but how those differences can’t do anything but destroy their chances.

Nyx is a hard boiled character, frequently imbibing a narcotic and all together willing to mix it up – somewhat reminiscent of other anti-heroines like Monza Murcatto, from Joe Abercrombie’s Best Served Cold. Unlike Abercrombie’s version of the though female, Nyx comes off much more organic, less a force of nature, and more truly altered by the world she inhabits. Somehow she retains a modicum of humanity and vulnerability that’s only glimpsed through her interactions with Rhys, who manages to be everything she loathes and also everything she wants.

Hurley has done something that feels unquestionably new.

For comparisons sake, Rhys is softer and more vulnerable, or at least that’s Nyx’s impression. I often wondered as I read it if there wasn’t some additional subtext to what Hurley was doing. By creating an inversion of the traditional romantic paradigm is she speaking to male readers who might see a strength in Rhys beneath the veneer Nyx places over him? Is she saying that strength exists underneath the women so often objectified in the vast majority of genre fiction? If that sounds like a mind trip, well, welcome to God’s War.

There’s no question that God’s War is a flawed book. I’ve glossed over many of its deficiencies because its so good at everything, but telling a story. And in that regard it’s pretty average. But, as a piece of social science fiction, and rewriting of the the ‘war at home’, Kameron Hurley has done something that feels unquestionably new. I strongly recommend it.