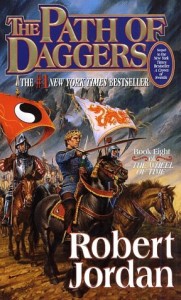 If A Crown of Swords is the first WoT book that I bought, A Path of Daggers (October 1998 publication) is the first WoT book that I bought in hardcover, on its release date. I read the first seven volumes while I was finishing up my MA in History at the University of Tennessee in 1997, but this volume I purchased while I was halfway through my 16 month teacher education/student teaching coursework. I remember using the internet in the university computer lab to look for several release dates for books I had a vague interest in and I saw when The Path of Daggers would be released in a few weeks, so I used some of my student loan money that I had at the time (between classwork and my required 60 hours of classroom observation, no way was I going to be able to hold even a part-time job) and bought the book in a local mall.

Some interesting points and relatively fewer examples of sniffing and skirt smoothing compared to the previous four volumes.

When I first read it in 1998 and again when I re-read it in 2000, I did not find the book to be quite as poor as some of the online comments have since made it out to be. Since I’m one of those poor benighted souls that never have worshiped at the altar of Mat Cauthon, I guess I did not “miss” his presence in this novel as much as others did. This is not to say that I found The Path of Daggers to be a “good” novel. Back then, I thought of it as being more of an “incomplete” novel, one that contained some interesting points and relatively fewer examples of sniffing and skirt smoothing compared to the previous four volumes, but one that ultimately lacked anything in the way of a strong concluding chapter or cliffhanger. The various subplots just stopped, with little in the way of interest outside of a vague curiosity about Rand’s. 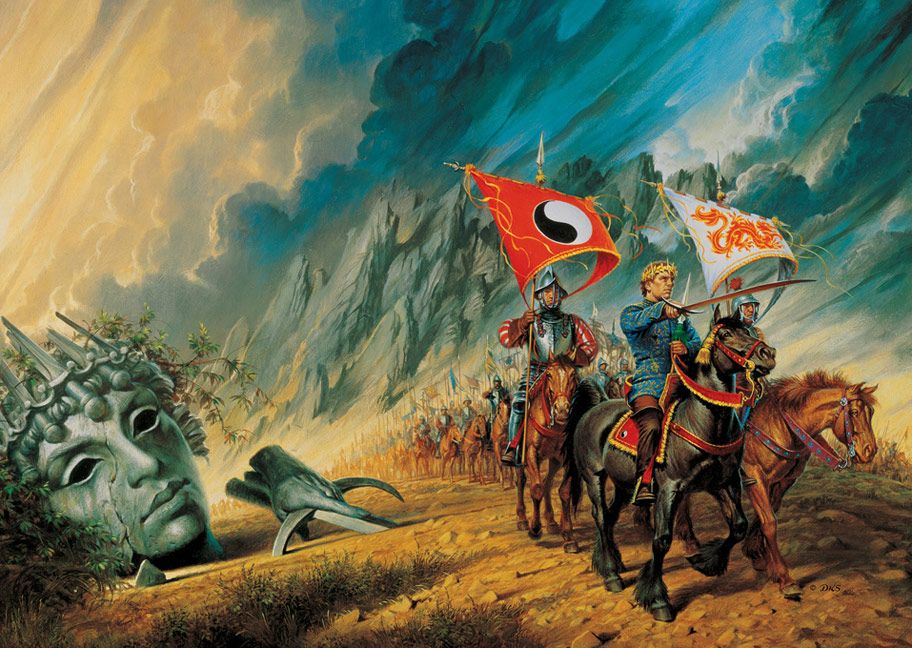 Ten years later, my opinion on the novel has changed only a little bit. Surprisingly as it may be for those who may expect me to view each novel from #7 to #10 or maybe #11 dimmer than the preceding one, I found The Path of Daggers to be relatively inoffensive in terms of its prose compared to the previous three volumes. Although way too much time was still wasted on outlining forgettable minor characters (or rather, the clothing that they were wearing) or on repeating details that had already been introduced and discussed several times in previous volumes, the frequency of each was less than compared to the previous three novels.

I found the Ebou Dar setting of the past two novels to be at best dull and at worst the setting for some of the worse Jane Austen pastiches that I had read in some time. As I stated in my previous commentary, the comedy of manners routine became stale rather fast and never was it as monotonous as in the Ebou Dar scenes. In The Path of Daggers, finally the action shifts away from Ebou Dar and finally the Bowl of the Winds is used to change the weather from an eight-month summer suddenly to the middle of winter. In showing this and the aftermath of that scene, Jordan plays the characters much more seriously than he did in A Crown of Swords and that alone made the scenes with Nynaeve and Elayne barely bearable. Alliteration!

Perhaps it is a bad sign [that] the prophesied savior of the world doesn’t enter the picture until almost exactly halfway into the film.

But if the Bowl of the Winds subplot was finally resolved after the third novel in which it was mentioned, the other subplots barely show much in the way of progress, with one notable exception. Egwene’s rebel forces are still slowly trekking across the countryside toward their long-awaited showdown with the Tower Aes Sedai. Not much happens other than the expected “Egwene uses her Wise Ones-taught mad skillz and shows the necessary strength of character to start gaining the upper hand in her battle for control of the rebel Hall.” Perrin wanders about a bit in the Southwest, gaining a regal liege and eventually going even more emo than he had been in the previous two novels. The Tower Aes Sedai is a mess and only toward the end is a solution discovered for that mess.

And then there are the chapters featuring the Dragon Reborn. Perhaps it is a bad sign of just how bloated the other, purportedly secondary subplots have become with the prophesied savior of the world doesn’t enter the picture until almost exactly halfway into the film. Leads a semi-successful campaign to stop the Seanchan, discovers the cost of hubris, and then mopes about a bit, trying to become harder than Chuck Norris with a stiffy. These were actually some of the more well-done chapters. I have said in passing that I think Jordan does a better job with Rand’s character than he does with the others (I know those who do enjoy the antics of Mat will disagree with my assessment here, but your opinion shall not sway mine), in large part because of the way he attempts to show the traumas that affect the Chosen One. The lack of connection with others, the growing inability to laugh or to shed tears, the anger and frustration – all of these are shown to be developing inside of Rand’s character. While Jordan again is guilty of overplaying this and trying to describe it in too much detail rather than trusting in the dialogue and in the character’s internal monologues (dialogues?) with himself (and Lews Therin, depending how you want to interpret that “character”), on the whole, this is the one character that develops appreciably in this volume.

The Path of Daggers reads as though it were maybe 3-5 chapters in a long Dickens novel.

Sadly, just like I found it to be on my initial reads, The Path of Daggers was a very “incomplete” novel. Nothing really is resolved. There is the sense that this is more a “moving the pieces” novel, which would be fine if said novel would display interesting character development, but outside of Rand’s and, to a lesser degree, Egwene’s, not much changes within the characters. A few things are begun, more subplots are introduced, but there is little sense of anything really being furthered here. This book reads as though it were maybe 3-5 chapters in a long Dickens novel rather than anything approaching a suitable complete volume of a multi-volume work. That being said, at least there was a slight improvement in the prose by the subtraction of so many of those damn irritating attempts at comedy. The comedy elements are still present, but thankfully are much reduced, making this a slightly more enjoyable for me to read than the previous three. Now to go deep into Winter’s Heart and see if I can survive the Crossroads of Twilight which await me.