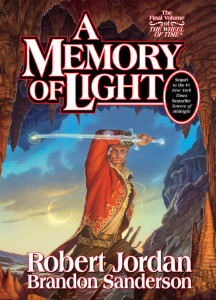 After nearly twenty three years and countless millions of words vomited out upon thousands of pages, Robert Jordan’s The Wheel of Time series finally concludes with its fourteenth volume, A Memory of Light. It has been a memorable series for those who’ve read, it albeit for some such as myself, it has become more an exercise in patience and restraint, waiting to see if the payoff justifies to any extent the laborious parsing of repetitive descriptions, redundant sentences, clothing and furniture porn, hackneyed villain motivations, etc. My own opinion of the series has fluctuated between a diversion during my last semester of grad school in the Fall of 1997 (it was a change of pace from reading Hitler’s memoirs and speeches for my grad seminar/research) toward it being a repetitive, poorly structured (and written) clunker of a novel/series. I wrote a series of posts on re-reading the Jordan-penned books, most of them for the first time since the release of the ninth book back in November 2000, and the re-reads did little to improve my deepening dislike for the series. Yet the first semi-posthumous release, co-written by Brandon Sanderson, I thought at first was a marked improvement. That was before I began to understand while reading the second co-written volume, Towers of Midnight, that the planned three-volume conclusion to the Wheel of Time series was terribly flawed in terms of narrative structure, characterization development, and prose. Therefore, it was with some trepidation that I ordered A Memory of Light and read it. Unfortunately, it is one of the worst-written books in a series renowned for its mediocre, bloated prose. END_OF_DOCUMENT_TOKEN_TO_BE_REPLACED 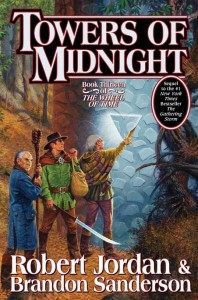 This quote, which opens the main sequence of every single The Wheel of Time book, can, with some alterations be applied to reading, memory, and the impressions formed (and altered) from the commingling of the above. I am not by nature someone who trusts wholeheartedly my first impressions; too often they change with time and further reflection. I have found this to be the case with this now-thirteen-volume epic fantasy series. When I reviewed the twelfth volume (and the first where Brandon Sanderson wrote most of the material in place of the deceased Robert Jordan), The Gathering Storm, I perhaps was a bit too forgiving of that book’s shortcomings because I reviewed the book after not having read most of the other volumes since 2000. Certainly my memory did not jibe too well with my experiences re-reading the first eleven volumes this past spring and writing commentaries on my impressions. In short, it was a slog re-reading this series. Not merely because of the myriad subplots nor because there were repetitive and yet shallow social commentaries, but also due to the creaky, non-graceful prose and uneven characterizations that often left me feeling cold. Despite the change in authors and the plot developments that one might expect in the penultimate volume of such a ponderous multi-volume series, Towers of Midnight, after some reflection, is a flawed volume in a very flawed series. END_OF_DOCUMENT_TOKEN_TO_BE_REPLACED 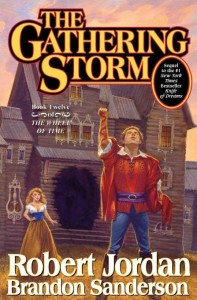 Debates such as these point to some intrinsic quality of the series that barely allows for there to be a middle ground. There is something for almost everyone, depending if one likes an action/adventure tale, political intrigue, social commentary, or even elements of a puzzle novel. Sometimes, there is too much of it all, and readers who enjoyed the earlier volumes might end up finding the past few volumes to be rather plodding, tedious affairs. After reading the eighth and ninth volumes, The Path of Daggers and Winter’s Heart, I found myself going years before even thinking of picking up the tenth volume, Crossroads of Twilight, which was perhaps the most difficult book to complete reading of them all at the time. END_OF_DOCUMENT_TOKEN_TO_BE_REPLACED 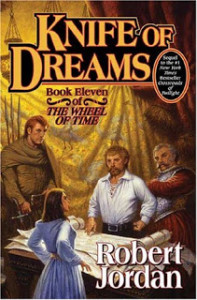 But on the whole, this was a better reading experience than the previous two novels. There were some long-awaited (and long-delayed) subplot resolutions that take place here. There was a slightly greater sense of urgency, whenever the characters did not stop to sip their peppermint-flavored tea served on a silver service. And there was one romantic relationship that managed to outdo Stephanie Meyers’ travesties. In a world (again, plug in that late, great movie trailer guy’s voice) where virtually all relationships feel light as a feather and stiff as a board (those readers in their mid-30s to mid-40s might get that reference), the interplay between the mischievous Mat and his bride-to-be, the Seanchan Daughter of the Nine Moons, Tuon, is actually well done. When it seems some characters *cough*Rand*cough* fall in love (or have someone fall in love with him) at the drop of the hat, this budding romance was not as offensive to read, although there were a few times where it felt as though the relationship was taking place more due to “prophecy” influences than anything “natural.” END_OF_DOCUMENT_TOKEN_TO_BE_REPLACED 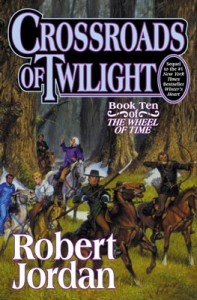 So I suppose I am at the point where those who’ve taken exception to my commentaries on the series are hoping that I’ll be so disgusted with the horrible prose, the mostly flat and dry characterizations, the execrable plotting, and glacial pace that I’d do a Roberto Duran and cry out, “No más, no más!” END_OF_DOCUMENT_TOKEN_TO_BE_REPLACED