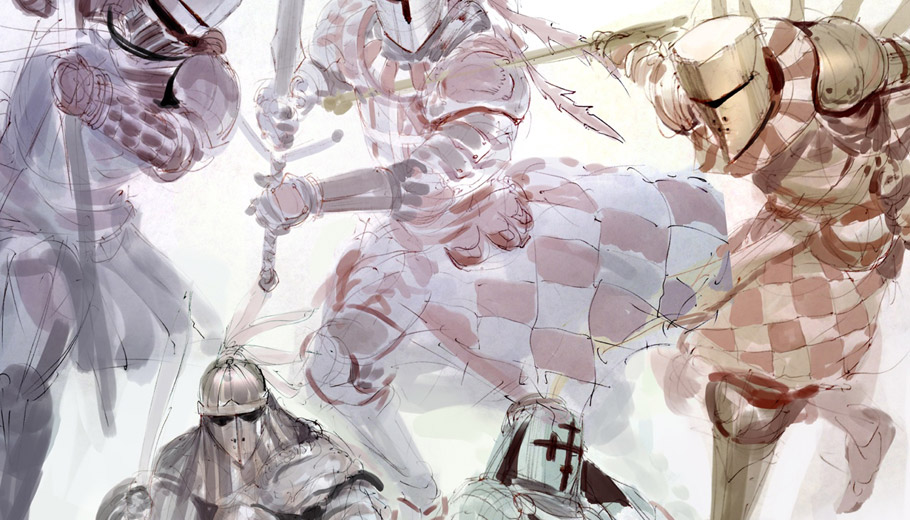 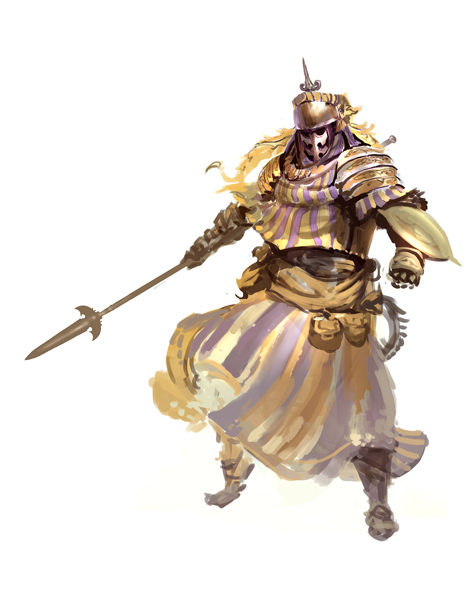 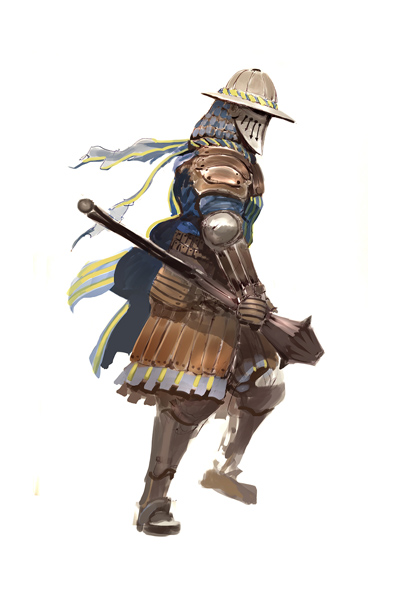 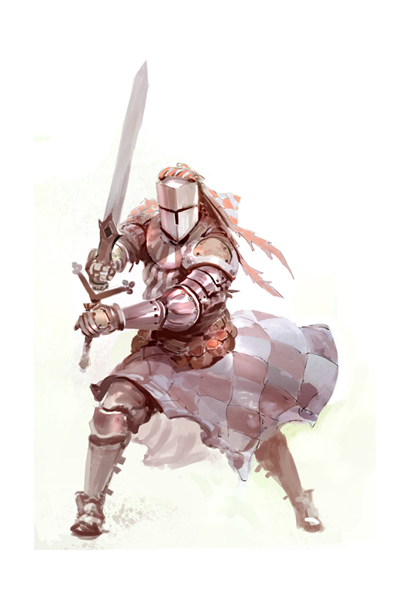 Most readers of A Dribble of Ink will know Kotaki for his work as a cover artist (notably, Peter Orullian’s The Unremembered, and The Malazan Book of the Fallen by Steven Erikson). In addition to his work as a cover artist, Kotaki is also known for his work on Guild Wars 2, ArenaNet’s popular MMORPG with some of the most iconic world and character design in the genre. Kotaki’s fans will recognize the abstract, ethereal concept art and landscapes from his time with Guild Wars 2. He does tone and epic encounters better than anyone else in biz, so these character studies — simple armoured knights, direct and full of personality despite their facelessness — are a pleasing diversion for the artist.

“This series of knights started simply because I really like drawing them to begin with and it sort of spiralled out from there,” he said, joking about the volume of sketches he done, and the rate at which he’s been posting them to his Tumblr page. “I even joke about making a book called The One Thousand and One Knights, but I had to hold off on it, because 1,001 is quite a lot of knights, and I really need to think about my approach and the reality of the project. One Hundred and One Knights doesn’t have the same ring to it. It sounds like a college course. Knights 101.” 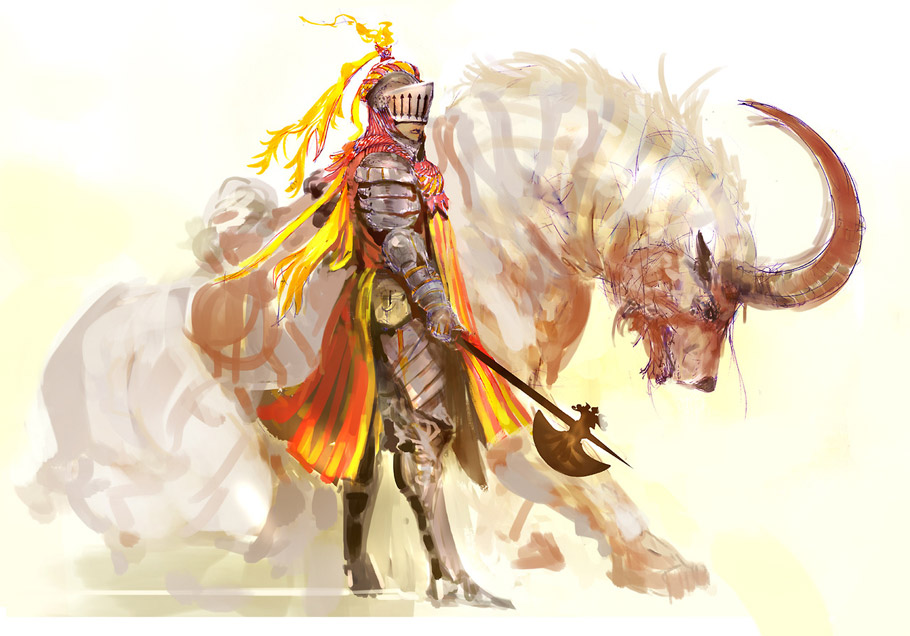 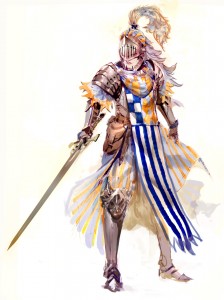 One thing that always stood out was the amount of colors and patterns used in the fashion and armor designs.

“In my role as a concept artist and illustrator, I’m constantly search for reference material. I often stumble onto great photo galleries of the various reenactment tournaments and fairs that go on celebrating medieval societies, and one thing that always stood out was the amount of colors and patterns used in the fashion and armor designs. This was great to play around with since I am always looking for new ways to play around with color in my work and designs.”

Kotaki left ArenaNet after five years as lead concept artist for Guild Wars 2, and is now pursuing new professional endeavours and to stretching outside the world of concept art to develop his “burgeoning illustration career.” Even after several years as a professional artist, Kotaki is quick to encourage artists to constantly improve themselves. “Practice is key,” Kotaki told The Ranting Dragon in a 2011 interview. “Work on the foundational skills first, then you can move onto creating things from your imagination.” To that end, these knight sketches are more than an exercise in creativity for Kotaki, they also provide him a playground to practice technique.

“Technically, I’ve been playing around with sketching the knights in ballpoint pen, then moving them onto the computer and playing around with them digitally,” he told me. “I’m applying a “softer” approach with these knight illustrations, and really trying for a light watercolor look. Also interesting has been the challenge in trying to balance digitally painting over the sketch completely, and keeping the original sketch lines. This approach is definitely influenced by some of the concept art you see in JPRGs where you still the line work with color washes used over top.” 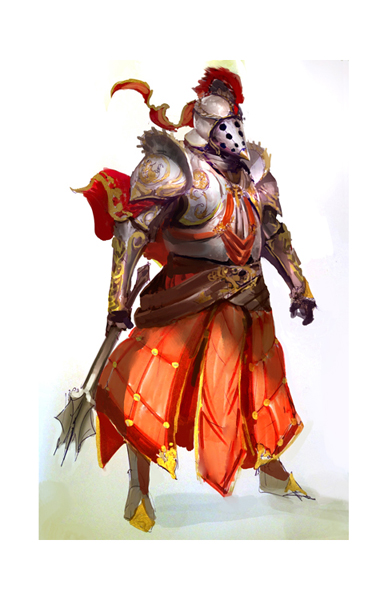 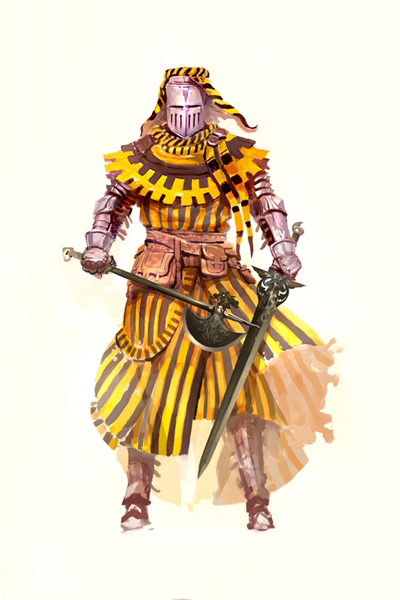 Kotaki continues to work on his One Thousand and One Knights, posting them to his Tumblr account on a regular basis. If this is your first exposure to Kotaki’s project, I encourage you to check out his 1,001 Knights, and, while you’re at it, the rest of his tremendous gallery of work.