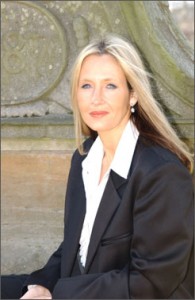 After several years of voracious fans re-reading Harry Potter and waiting impatiently for the sometimes-enigmatic author to breath a word about her next novel, J.K. Rowling has finally announced her next novel. It’s coming from Little, Brown, doesn’t have a title, isn’t related to Harry Potter and is aimed at an adult audience. I can almost hear you salivating with unbound excitement and lust.

“Although I’ve enjoyed writing it every bit as much, my next book will be very different to the Harry Potter series, which has been published so brilliantly by Bloomsbury and my other publishers around the world. The freedom to explore new territory is a gift that Harry’s success has brought me, and with that new territory it seemed a logical progression to have a new publisher. I am delighted to have a second publishing home in Little, Brown, and a publishing team that will be a great partner in this new phase of my writing life.”

Of course, we find out little-to-nothing about the book, but it’s nice nonetheless to know that Rowling’s ready to break her relative radio silence and has proceeded far enough along with the novel to sign a deal. Any guesses what type of novel she’ll write? More importantly, though, do you think she will fall victim to Stephen R. Donaldson’s theory that fans follow series around, rather than authors?