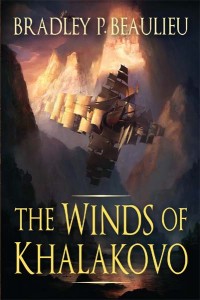 My friends, sometimes you have to be careful what you ask for. When I first started talking to Aidan about a guest post on A Dribble of Ink, I thought of a couple of subjects that seemed easy at the time. The first was about the differences between writing a Book 1 in a series vs. its sequel. The second was about finding the sweet spot in terms of the number of POV characters for an epic fantasy. The first one was pretty easy to knock out, because it was more about relating my experiences over the course of writing the first and second novels in my trilogy. This second one, though, has been a tough nut to crack.

Why? That’s a fair question, because let’s face it: on the surface this question is easy to answer. How many POVs do you need? However many the story needs to tell it effectively. While I believe this to be true, it’s also about as useful as a screen door on a submarine. It doesn’t really illuminate the choices that have to be made with respect to POV, so I think what I’ll try to do is examine the question using two epics I’ve read recently.

On the one extreme, we have George R.R. Martin’s A Song of Ice and Fire. How many POVs does Martin have now? A few dozen between A Feast for Crows and A Dance with Dragons, which really comprise a single novel broken up geographically (as opposed to breaking a large novel up temporally). Had anyone told an editor twenty years ago that they were going to start a series in which the novels would expand to twenty POV characters, they would have been laughed out of New York. And yet, here it is, a masterful story with a scope about as wide as you can have in fiction.
END_OF_DOCUMENT_TOKEN_TO_BE_REPLACED