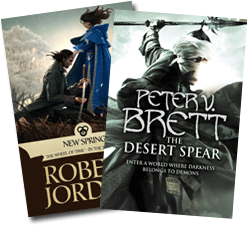 Last week, I wrote a cage match between Moiraine and The Dagda Mor for the 2012 Suvudu Cage Matches. Moiraine stomped Terry Brooks’ demon lord into the ground and moved onto the next round to face Jardir from Peter V. Brett’s The Desert Spear. When the editors at Del Rey/Suvudu approached me about the opportunity to co-author the Moiraine vs. Jardir cage match with Peter V. Brett, I couldn’t refuse. Together, Peat and I cam up with a pretty wicked fight between the two powerhouse characters. If you’re into these cage matches, check out the Moiraine vs. Jardir match and defend me and Peat from the Wheel of Time fans ripping us a new one in the comments section!
END_OF_DOCUMENT_TOKEN_TO_BE_REPLACED 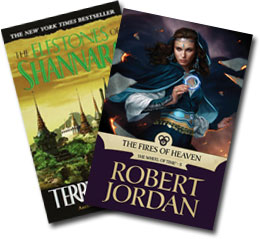 I was asked to contribute another write-up for Suvudu’s 2012 Cage Matches. This time around, it’s The Wheel of Time‘s Moiraine Damodred, diminutive Aes Sedai, versus Terry Brooks’ hulking demon lord, The Dagda Mor. A taste:

The vicious sound of her Warder locked in battle with the Demon clawed at her, but Moiraine could not waste a thought for Lan, no matter his peril. The Dagda Mor dropped from the sky, and Moiraine caught a bat-shaped beast winging away into the dark night. Even hunched, the Demon towered over the diminutive Aes Sedai. Tufts of green hair, like saw-grass, sprouted over its entire body. In its hands was a long, gnarled staff, the end glowing green as magic coursed between the Demon and the shaft.

Moiraine wore a brocaded blue silk dress, horizontal slashes of alternating blue and white crossing her chest, and a black belt circling her waist. On her feet were high-calfed leather boots and gossamer stockings, made from Shara’s finest silk. Over all this, she wore a dark blue cloak trimmed in white, too light for travel, but so perfectly fitted that it gave the Aes Sedia a regal look, hinting at her noble Cairhienen background. The hood of her cloak was drawn up, so that the only hint of life in the shadowed recesses was the sparkle of her eyes and the glint of light caught in the small blue stone that sat suspended on her forehead by a silver chain.

“Can we get on with this?” the Dagda Mor growled. Moiraine’s eyes snapped up from admiring her outfit, startled from her reverie by the Demon’s words.

Read the Moiraine vs. The Dagda Mor cage match!

I accepted the gig before I thought about the fact that I’d be assuming a character from The Wheel of Time, which has one of the largest and most loyal fan bases in all of Fantasy. To say I was nervous for the fan reaction would be an understatement of enormous proportion. I had some fun with the match, though, so I hope they’ll enjoy it!