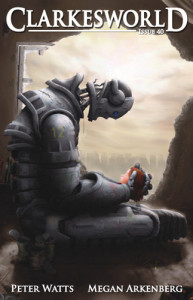 On Friday, February 22nd, it was announced my Neil Clarke, editor of Clarkesworld Magazine, that the well-regarded Speculative Fiction magazine will be adding a new reprint section, headed by Gardener Dozois, an equally well-regarded anthologist.

Clarkesworld Magazine, a leading science fiction and fantasy magazine, has named award-winning editor Gardner Dozois (pronounced “doe-zwa”) to helm its new reprint department. In his role as reprint editor, every month Gardner will draw upon forty years of experience to select two exemplary science fiction stories published during the last three decades. The first of these stories are scheduled to appear in the April 2013 issue of the magazine’s online, digital and print editions.

“Since my heart attack last year, when readers responded with encouragement and support, I’ve been trying to find a way to say ‘thank you’,” said Neil Clarke, Clarkesworld Editor-in-Chief. “The reprint department had been on our wish list for some time and when the opportunity to work with someone of Gardner’s caliber arose, I knew I had found the perfect way to express my gratitude.”

Clarkesworld has long been one of my favourite SF magazines and it’s wonderful to see them joining together with someone like Dozois. With John Joseph Adams at Lightspeed, Ann VanderMeer and Ellen Datlow at Tor.com, and Johnathan Strahan at Eclipse, it’s interesting to see some of today’s best short fiction editors continuing to become as important to online markets as they are to the long-running tradition of print anthologies.