Welcome to the final instalment of the Daggerspell Reread and Review Series!

The second part of the project, we tackled a large chunk of Daggerspell, which covered the first 184 pages, and saw the most recognizably ‘epic fantasy’ conflict so far: a war between armies, a battle between mages (good and evil), and a beautiful woman falling in love with a (sorta) prince. Sounds cliche, but, as we’re learning about Kerr, nothing she writes is ever so simple as it seems.

Though Cullyn, Jill and Nevyn are at the heart of the conflict in that section of the book, it was Lovyan, mother of Rhodry and Rhys, that caught our attention. Kate said:

Look how neatly Kerr introduces an older woman: She is a noblewoman who through a completely realistic twist in the law (explained clearly by Kerr) is a ruler in her own right although she is subordinate to her own son (who is gwerbret, which I will define here as a lord who is of lesser rank than the king but who has a number of lords under his rule).

Lovyan does not swing a sword. She rules. She rules over a collection of lesser lords (all landed) with a full understanding of the ways in which her situation gives her power and the ways in which she has to carefully negotiate her position because she is a woman.

Lovyan proves herself as a good ruler even while Kerr makes it clear that her being a woman makes her situation precarious. Nor is her role seen as a one note role. She is frustrated by her inability to reconcile her feuding sons (an issue that will become central to the plot later), she engages with Nevyn because she understands that he is far more than the simple herbman he pretends to be, she shows kindness to Jill. And she is a little secret in her past, an affair she obviously has had to keep hidden all these years.

She is an older woman with agency and a full personality in a genre that gives characters like her short shrift. She is absolutely one of my favorite characters in the entire series.

So, join us while we discuss the ending to Daggerspell, reflect on one of Lord of the Rings‘ greatest lessons… and twist ourselves into Celtic Knots as we look back on the entire experience!

END_OF_DOCUMENT_TOKEN_TO_BE_REPLACED 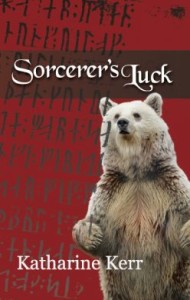 Which brings me back to Sorcerer’s Luck: a story about the relationship between Maya Cantescu, a struggling art student and vampire-but-not-really based in San Francisco, and Tor Thorlaksson, a wealthy sorcerer and bjarki – that is, someone who shapeshifts into a bear. Among her other talents, Maya has the ability to see through illusions, and when Tor finds himself being haunted at the dark of the moon by otherworldly manifestations, he hires Maya to see through them. But their professional relationship soon becomes complicated, not only by their mutual attraction to one another, but by the increasingly violent actions of Tor’s sorcerous enemy. What’s the real reason for Maya and Tor’s connection? And what does Tor’s unknown opponent want? END_OF_DOCUMENT_TOKEN_TO_BE_REPLACED

Daggerspell is the first volume in Katharine Kerr‘s Deverry Cycle, which Kate describes as her, “favorite post-Tolkien epic fantasy series.” Big words. She also says, “I believe Deverry could exist somewhere. After reading the books, I feel as if I have been there. I still think about events and dramatic moments in this series frequently, rather as I do memories from my actual life. That’s how much the narrative worked its way into my mind and heart.” END_OF_DOCUMENT_TOKEN_TO_BE_REPLACED