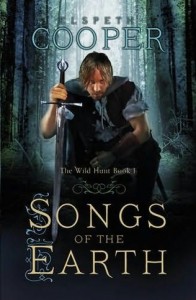 I was in hospital recently (my gallbladder and I were in the middle of an acrimonious break-up) and as you do, I got chatting with my fellow inmates.

‘So, what do you do?’ asked the woman in the opposite bed, in the pink bunny slippers.

I wouldn’t mind Val McDermid’s sales, I thought. ‘Actually, I write fantasy.’ I held up my copy of The Name of the Wind. ‘Like this.’

My interlocutor peered at the cover, but obviously didn’t recognise the name. ‘Is that like that Twilight, then? All vampires and werewolves and stuff?’

‘Not really. It’s more sword and sorcery.’ In the face of her blank expression, I fumbled for the one name I was sure she would have heard of. ‘Lord of the Rings.’

The shutters of indifference came down with a near-audible clang. ‘Oh. Stories for boys.’

I did try to explain, but apparently because I didn’t write about oversexed earls in pursuit of fluttering virgins, or ghastly Yakuza executions in grim grey cities, I was now off the lady’s literary radar. What she would have made of the longsword hanging up in my office I do not know.

The doctor who came to draw some blood asked me the same question, in a hearty, take-your-mind-off-what-I’m-doing-with-this-needle voice, whilst prodding my inner elbow for a vein.

‘My son’s into all that whatchamacallit, Assassins’ Creed, on his X-Box. I’ll get some gauze to wipe that up.’

A year previously, I’d had a similar conversation with my publisher. She’d just had a meeting with the fiction buyer from Waterstones, and the author gender vs target readership issue had reared its ugly head: boys won’t buy books written by girls, and it can affect sales by as much as ten percent – the horror! My publisher and I even went so far as to toss around some gender-neutral pen names like Alex Cooper before she decided that female was the new black for fantasy writers, and that was that.

Clearly, the publishing industry is well ahead of the curve here; for the rest of the population, fantasy is just not something that girls do. It is still perceived as a very male-dominated genre, the province of geeks and gamers and lank-haired Lurches in Slipknot hoodies. The likes of Jemisin, Downum, and Cashore have not yet penetrated the wider public consciousness. Meyer has, Charlaine Harris has, but we can’t all have big-budget TV shows and movies and enough with the damn vampires already! You’re giving us girls a bad name.

I was rather hoping that the Game of Thrones mini-series would start a few more cracks in the genre glass ceiling; if anything it seems to be reinforcing it, but that’s another issue, being debated elsewhere by minds more articulate than mine.

So, a question for the floor: if a woman tells you she’s a writer, do you assume that because she’s a woman, she won’t be writing about sharp edges, harsh realities? Does the gender of the author alter your perceptions of a book as you’re browsing in the store, and make you more likely to pick it up, or less?