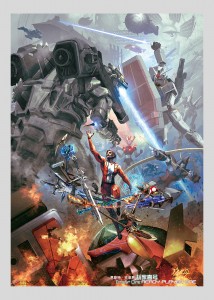 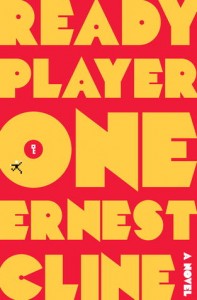 Earlier this year, Ernest Cline made waves among both Science Fiction and geek fandom with the release of his debut novel, Ready Player One, a dystopian tale of a group of MMORPG-playing misfits thrust into a virtual scavenger hunt with enormous stakes: total control of OASIS, a virtual world that makes World of Warcraft look like small beans, and a real-world fortune worth more than Greece’s recent bailout. Cline fills this tale with an almost endless parade of callouts to the mainstays of young geek culture in the late part of the twentieth century that are ultimately either the novel’s biggest strength or weakness.

Ready Player One succeeds on a thematic level with a rather open metaphor for the current and potential crisis that humanity faces as we continue to become more and more ensnared by the ghost in the machine. The plot of the novel is set around Wade Watts, better known as Parzival, low-level gunter, and his efforts to win the day and save OASIS, a videogame/life simulator that looks like Second Life meets The Sims meets World of Warcraft, Dungeons and Dragons and a barrel of HGH, that has ensnared a huge majority of the earth’s population with its promises of a better world drawn in pixels (well, pixels isn’t quite right, since the virtual world is laser-drawn onto the gamers’ eyeballs, but give me the metaphor). Of course, Cline isn’t unaware that the world’s become such a shithole in large part because of this game and his characters take a long journey to this realization as the novel proceeds.

With devices like smartphones and social networking platforms like Facebook taking over the halls of highschools, the concept of direct human communication is becoming more and more foreign to the youths who will one day run this world. Cline never sacrifices fun for this thematic exploration, but it’s clear that he’s also concerned about a future where multiplayer and ‘social’ gaming no longer involves standing side-by-side with your competitor at an arcade cabinet. Hell, these days you no longer even have to be in the same room. Or continent. This evolution of social structure and communication will be one of our generations biggest challenges and Cline’s vision for it’s potential fallout are frightening.

Cline, like the protagonists and all the other OASIS-obsessed millions in his dystopia, seems determined to use Ready Player One as a soapbox to show off the excessive depth and breadth of his deep knowledge of ’80s pop culture and gaming, and to prove that that painfully neon decade meant something beyond Reagan and Gorbachev, Halley’s comet, and the fall of the Berlin Wall. Often this results in loaded descriptions that heavy-handedly attempt to appeal the readers’ similar nostalgia. Often, though, the reader is expected to recall their own experience of the called-upon game/movie/song to fill in the blanks of Cline’s world-building or characterizations. Mid-way through the novel, the protagonist, Parzival, visits a small town:

The place reminded me a lot of the town in the movie Footloose. Small, rural, and sparsely populated. The houses all seemed incredibly big and were placed ridiculously far apart. It astounded me that fifty years ago, even lower-income families had an entire house to themselves. The NPC citizens all looked like extras from a John Cougar Mellencamp video. I saw people out raking leaves, walking dogs, and sitting on porches. Out of curiosity, I waved at a few of them and got a friendly wave in return every time.

Cline does a bit of work (“Small, rural and sparsely populated”), but also assumes that the reader has as full of a knowledge of the ‘80s as he does. Don’t know what Bomont looks like? Never seen a John Cougar Mellancamp video? Too bad. So, much of the effectiveness of Ready Player One is stunted if the reader wasn’t born in the ‘70s or very early ‘80s. Being in my mid-twenties, a lot of the references and odes were recognizable to me, but didn’t tug on my heartstrings as Cline intended. Sure, it’s cool when he mentions Tempest or Knight Rider, but what the heck is Ladyhawke? He faces down a boss in what game? For what system?

Don’t know? Oops, game over. Got another credit?

So, these rose-tinted glasses removed, how does the novel stand up as a piece of entertainment? Pretty damn well. Now, don’t get me wrong, the nostalgia is the selling point of the novel, but Ready Player One has all the right elements for a cracking, successful dystopian novel. The story hits high gear within the first handful of pages and doesn’t let up for the entirety of its length; the cast of characters is small, but from the main cast to the minor side characters, they’re all easily recognizable and (almost) equally likeable. For the reader to care about a world where so much has gone wrong with society, they have to recognize admirable qualities in the characters that inhabit it and Cline doesn’t disappoint. The protagonists are all socially-inept, damaged individuals, but they also seem eerily familiar to anyone who’s spent enough time playing World of Warcraft or locked away in a basement on a sunny day deep in a favourite novel. We’ve all been there, and the characters of Ready Player One help seed the idea that there’s some hope in the future, no matter how far down the dumper society might fall.

Ready Player One certainly indicates that Cline is a young author worth watching, but it will be interesting to see if Cline can follow up Ready Player One with a similarly entertaining novel that doesn’t ask its readers to share the same exact geeky heritage as himself, or if we’ll be served with a re-tread that also falls back on its reader’s nostalgia.

If you fall within the age window that Cline is clear writing for (say, late-twenties to mid-thirties) and spent your childhood geeking out to Dungeons of Daggorath and The Breakfast Club, you’re in for a non-stop nostalgia ride that will have you smiling from ear-to-ear for the entirety of its 300-odd pages. If you grew up outside of that golden age of geekdom, there’s still an immensely enjoyable novel there, with a solid exploration of the challenges facing our society as computers and electronic communication continue to consume more and more of our lives, but just be prepared to work a little as you try to wade through Cline’s un-ending love for the ‘80s.