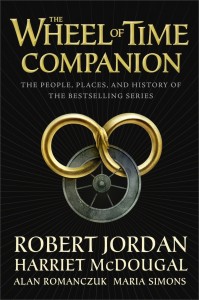 The official companion guide for Robert Jordan’s Wheel of Time series will be released in November 2015.

“The story of The Wheel of Time spans fifteen books, but the fantasy world which that story resides within is more complex and detailed than even those books could relate,” describes the official announcement on Tor.com. “Only a fraction of what author Robert Jordan imagined ended up on the page, the rest going into his personal files.”

For those fans still haunted by their experience with Tor Books’ previous Wheel of Time companion, The World of Robert Jordan’s Wheel of Time, you can rest easy. This is a complete, from-the-ground-up overhaul of the companion guide, unrelated to the previous companion published in 2001, and promises to be much more comprehensive, which only covered the first several books in the series.

Included in The Wheel of Time Companion (via Tor.com):

In addition to the above, the companion also promises to “[shed] light on some of the most intriguing aspects of the world, including biographies and motivations of many characters that never made it into the books, but helped bring Jordan’s world to life.”

Harriet McDougal, former Editorial Director for Tom Doherty Associates, was Robert Jordan’s wife and editor, and had a major hand in compiling this new companion. Working alongside McDougal on the project are Alan Romanczuk and Maria Simons, Jordan’s editorial assistants throughout the writing of most of the Wheel of Time. Together, they aided Brandon Sanderson as he wrote the final three volumes of the epic series.

The updated snake and wheel logo is by Sam Weber.

With people like that involved, who’s lives have revolved around the Wheel of Time for nearly two decades, fans are sure to be pleased by the final product. (Let’s just hope the artwork in this edition of the companion is better than the regrettable art included in The World of Robert Jordan’s Wheel of Time.)