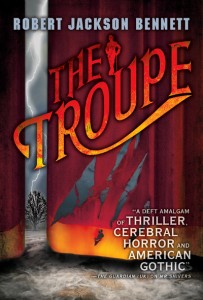 So what does a writer do? They pull off a chunk, like a piece of clay. Then they take that chunk and massage it, and maybe add more chunks from the main ball if they think it’s necessary, and they sculpt it and shape it and adjust it until it has the semblance of a real person – the sculpted chunk’s got emotions, experience, agency, prejudices, goals, all that kind of fun crap.
END_OF_DOCUMENT_TOKEN_TO_BE_REPLACED