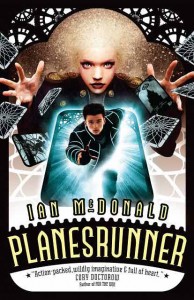 It’s clear that McDonald put a lot of effort into what really makes an appealing novel for younger readers, and in the process peels back the layers to examine what makes YA so much more enjoyable than a lot of ‘adult’ fiction. Most interesting is the idea that younger readers have an improved mental agility that allows them to jump around the story, absorbing different ideas, concepts and plot strings without needing the constant infodumps and explanations that bog down so much of adult Science Fiction and Fantasy. When a reader trusts the author, as McDonald suggests that younger readers are more capable of doing as compared to older readers, the author is freed up to concentrate on a fun, exciting story that’s able to develop its themes and characters rather than hand-holding its reader through a new world. Often you’re left just having to accept that things fall easily into place for Everett, the titular protagonist, but the reward is McDonald being free to throw him into some sticky situations without the reader losing their sense of reality.
END_OF_DOCUMENT_TOKEN_TO_BE_REPLACED