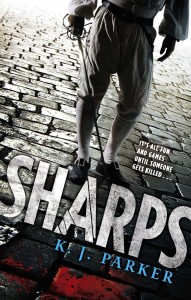 After nearly two decades, K.J. Parker’s identity has been revealed.

“For 17 years,” wrote Jared Shurin of Pornokitsch, who secured the opportunity to reveal Parker’s true name, “the identity of K.J. Parker has been one of fantasy literature’s most tightly-kept secrets.

Now, after a dozen novels, a collection of short stories, a handful of essays and two World Fantasy Award wins, K.J. Parker has stepped forward – as author Tom Holt.”

Fans have been trying to discover Parker’s identity for years, and the most earnest detectives will not be surprised by the reveal. Holt (or, more intriguingly, his wife) has long been considered the front runner, with Neth Space calling it way back in 2012. Some readers will be disappointed that Parker was not a woman after all, which was a another widely supported theory, even leading some to believe that Parker was Kim Holt, Tom Holt’s wife. Still, it was fun while it lasted.

In addition to the official reveal, Parker/Holt was also on the Coode Street podcast, chatting about his new serialized novel, The Two of Swords. And, if you’re looking for something really recursive, here’s an Tom Holt interviewing K.J. Parker for Subterranean Magazine in 2010.

I was at the bookstore yesterday and noticed a copy of Sharps sitting there, hidden away between several other books. I didn’t realize it was out, my wife was still busy elsewhere in the bookstore and some of my friends have recently raved about Parker’s work, and Sharps in particular. So, I picked it up and started leafing through it. What’s the harm, right? It goes without saying that I really enjoyed the small bit of the book I browsed through, otherwise I wouldn’t be writing this post.

For the first time in nearly forty years, an uneasy truce has been called between two neighbouring kingdoms. The war has been long and brutal, fought over the usual things: resources, land, money…

Now, there is a chance for peace. Diplomatic talks have begun and with them, the games. Two teams of fencers represent their nations at this pivotal moment.

When the future of the world lies balanced on the point of a rapier, one misstep could mean ruin for all. Human nature being what it is, does peace really have a chance?

Sharps is, for lack of a more poetic way to put it, the first commercial KJ Parker novel. The one where the elevator pitch – swords, sports and diplomacy – is just as appealing as the text itself. And you know what? It is marvellous. Sharps not only has all the wit and complexity of Parker’s other work but also hearty doses of glory, romance and adventure.

Sharps also appeals through its surprisingly epic scope. Although a long way from writing a ‘chosen one’ narrative, the book has a more familiar fantasy structure than Parker’s other work: five reluctant heroes are off to save the world. Parker has repeatedly written about the impact of small people on great powers, but, in the past, the focus has been entirely on the individual. The Engineer Trilogy, for example, is about one man’s plot to change the face of the world. But the face of the world is incidental: all he wants is to go home. The Folding Knife is similar – a man sets out to forge an empire, but all he really desires is the love of his family.

With all the flying steel of Sharps, a bit of swash and buckle is inevitable, yet Parker stays on message: life and death, politics and war – all riveting stuff, but they’re never games. And for those that persist in taking these things lightly: Here they fight with messers. God help them.

Packed with sharp edges and provocative points, Sharps may be the book that fantasy readers have been waiting for. Not necessarily for Sharps qua Sharps (although it is undeniably great) but because its crowd-pleasing premise should serve as the long-awaited gateway drug to Parker’s entire world.