Posts Tagged: The Desert of Souls

The Desert of Souls by Howard Andrew Jones 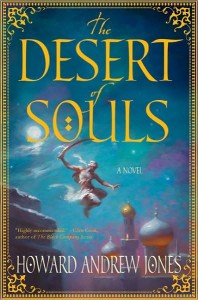 One Thousand and One Nights, or, as it’s often better known in the English speaking world, Arabian Nights, is a collection of Middle Eastern folk tales compiled in Arabic during the Islamic Golden Age. The basic premise is that a Persian king discovers his wife’s infidelity and has her executed. Deciding all women are the same, the king marries a series of virgins only to execute each one the next morning, before she has a chance to cuckold him. Eventually the vizier cannot find any more virgins until his daughter, Scheherazade, volunteers herself as the next bride. On the night of their marriage, she begins to tell the king a tale, but does not end it, forcing the king to postpone her execution in order to hear the conclusion. The next night, as soon as she finishes the tale, she begins a new one, and the king, eager to hear the conclusion, postpones her execution once again. So it goes on for 1,001 nights.

Built around that frame story, Scheherazade narrates historical tales, love stories, tragedies, comedies, poems, burlesques, and even erotica. The book in its entirety demonstrates many innovative literary techniques like the aforementioned frame story, embedded narratives, foreshadowing, and unreliable narrators. Thematically, the stories heavily utilize fate and destiny, most prevalent being the notion of the self-fulfilling prophecy. Elements of genre tropes from crime fiction, horror, and science fiction, pop up frequently. The stories aren’t just incredibly compelling, but they paint a much different perspective of the Islamic history and culture than Western perception might imply.

This is a review about The Desert of Souls by Howard Andrew Jones, or at least it was when I started it. The truth is I can’t talk about one without the other. END_OF_DOCUMENT_TOKEN_TO_BE_REPLACED