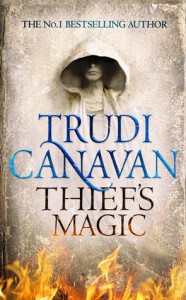 When Leratian history student Tyen Ironsmelter discovers Vella, a sentient, magical book, while on an expedition with the notorious Professor Kilraker, he knows he should turn such a valuable artefact over to the Academy. Instead, rather than see Vella doomed to decades of neglect and obscurity by those who don’t appreciate her – or worse, destroyed – Tyen keeps her for himself. But Vella, as the creation of a legendary magician, knows magical secrets, and when her powers are discovered by Tyen’s masters, their treachery forces him to flee. Meanwhile, Rielle, a dyer’s daughter from the city of Fyre, struggles to conceal her ability to see Stain, the shadowy absence of magic. Men who can see Stain become priests, using their powers to serve the Angels, but for women, such work is forbidden. After being attacked by a tainted, an illegal magic user, Rielle is pushed into the company of Isare, a handsome artist, and exactly the sort of person her family doesn’t want her to marry. But as her connection to Isare grows – and as her ability to see Stain forces her to keep secrets from him – Rielle’s position becomes more and more dangerous. What is the true nature of magic? What does it mean to travel between worlds? And how does it change those who do? END_OF_DOCUMENT_TOKEN_TO_BE_REPLACED