We See A Different Frontier by Fabio Fernandes & Djibril al-Ayad 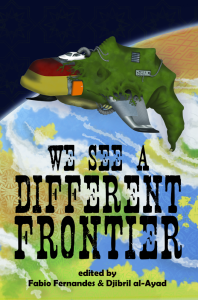 There’s a saying my grandmother likes to use when people are eating dinner: instead of saying ‘I’m full’, she prefers ‘I’ve had an elegant sufficiency’. It’s this phrase which sprang to mind as I finished We See A Different Frontier: because everything about it, from the overarching themes of the stories themselves to their place and number in the collection, feels perfectly designed to amaze, impress and satisfy. It is, in every way that matters, an elegant sufficiency of stories; the kind of anthology that leaves you feeling eager – but not starving – for more of the same.

Bracketed by a preface from Aliette de Bodard and an afterword from Ekaterina Sedia, Frontier is a powerful, fascinating and deeply necessary examination of colonialism through an SFFnal lens – and, by extension, of its real-world history and legacy. In a genre which so often deals with questions of technology, expansion, power and revolution – spacefaring explorers discovering new worlds, rebels battling empires and dystopian states, humans negotiating with elves and aliens – the Western, imperial roots of much classic SFF also dictate that, even though there’s a glut of stories championing the underdog, exulting in their endless against-the-odds victories over a sea of evil masters, it’s comparatively rare for the oppressed heroes of science fiction to resemble those groups most oppressed in real life.

All too often, we shy away from stories whose oppressor/oppressed dynamics purposefully and overtly reflect our many real-world inequalities.

There are, for instance, any number of dystopian stories that lament the narratively-imposed lack of heteronormative romantic choice, but none I can think of that mimic the actual, real-world oppression of queer love. Similarly, and despite the awful volume of historical evidence that human colonialism and Western expansion have invariably been fraught with violence, evil and bigotry, our stories tend overwhelmingly to suggest the opposite, couching human colonists as either enlightened liberators or scientific progressives, and Western (or Western-style) hegemony as the system that supplants, rather than endorses, tyrannical empire, or which at the absolute best is shown to be open to abuse, not because of any inherent flaws, but due to the temporary lack of a Good King. All too often, we shy away from stories whose oppressor/oppressed dynamics purposefully and overtly reflect our many real-world inequalities: at best, we brush them off as didactic, simplistic and agenda-laden, their messages so obvious as to go without saying (because doing so makes us uncomfortable, natch), and at worst, as biased propaganda designed to make “us” look like the bad guys. END_OF_DOCUMENT_TOKEN_TO_BE_REPLACED