One of the things behind grimdark, I think–and it’s not just grimdark, either, but most of Anglophone literature since somewhere around World War I–is a conviction that being pessimistic, tragic, depressing, dark means that a text is more “realistic,” more “serious,” and therefore inherently “better” than it would be if it allowed optimism and hope. I’ll get into the issue of “realism” later, but I want to point out here that tragedy is not inherently “better” as a literary form than comedy and writing a tragedy does not demonstrate greater skill/talent/genius than writing a comedy. (Kind of the reverse, in fact. Comedy is hard.) END_OF_DOCUMENT_TOKEN_TO_BE_REPLACED 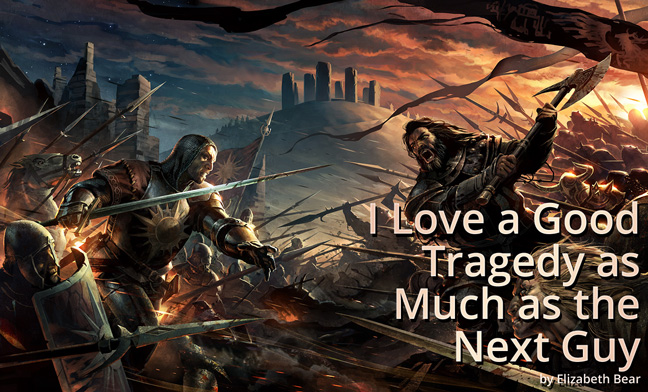 I believe in fiction where actions have consequences, and sometimes terrible prices are paid, and sometimes good people meet fates you wouldn’t wish on Count Rugen. I would argue that darkness and uncertainty are a needful thing; that without them, there are no stakes, no emotional engagement. END_OF_DOCUMENT_TOKEN_TO_BE_REPLACED