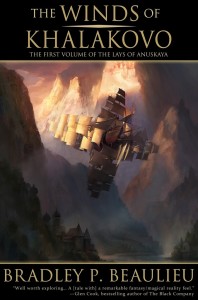 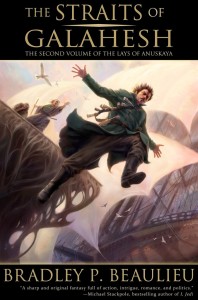 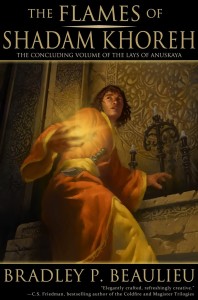 END_OF_DOCUMENT_TOKEN_TO_BE_REPLACED

[I’ve] closed a deal with Betsy Wollheim for a new epic fantasy trilogy called The Song of the Shattered Sands. It’s a story set in a powerful desert city that controls the flow of trade and spice through otherwise impassable terrain. There are echoes of both A Thousand and One Nights and Thieves’ World.

It’s a story about Çeda, a woman who fights in the pits to scrape a living from the cruel but beautiful city she calls home. As the story opens, she discovers that the book her mother left her before she died holds the clues to the unraveling the mystery of her mother’s death, which was tangled up in the story of the Twelve Kings of Sharakhai, men who have ruled the desert with an iron fist for nearly two hundred years. As Çeda begins to unlock the secrets hidden within the poems in the book—as well as what her mother was trying to do before she died—the Kings learn of her, and they will stop at nothing to keep those secrets buried in the desert where they belong. And so the chase is on. Çeda must unlock the hidden riddles of her mother’s book before the Kings find her. She had better hope she does, for she is the last hope for the people of the desert.

It’s great to see Beaulieu take the critical success he received for his first trilogy, The Lays of Anuskaya, published by Night Shade Books, and parlay it into a deal with a larger publisher. Daw is home to some of the best (traditional/epic/secondary world) Fantasy writers working today, including Patrick Rothfuss and Saladin Ahmed. Beaulieu’s Arabian Nights-inspired trilogy sounds like it will be a good fit. It’s great to see more Fantasy written that features a setting inspired by something other than Medieval Western Europe. After Beaulieu’s first trilogy, with a Russian-inspired setting, he’s quickly asserting himself as one of the most interesting world builders in the genre. I’m quite looking forward to this.

END_OF_DOCUMENT_TOKEN_TO_BE_REPLACED 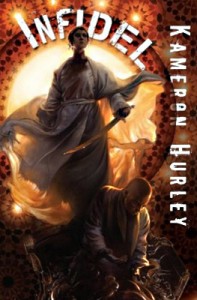 Suffice to say the characters that survived God’s War are back in Infidel along with some new ones. There’s a significant jump in time between the two and Hurley does a solid job of filling in the details. Generally speaking, the narrative is much smoother, eschewing the choppiness and pacing issues that plagued God’s War in the early going. That, combined with a continuation of Hurley’s brilliantly constructed characters, authentic and fully realized world building, and pull no-punches style, makes Infidel not only a worthy addition to God’s War, but a wholesale improvement.
END_OF_DOCUMENT_TOKEN_TO_BE_REPLACED