Posts Tagged: The Girl with All the Gifts 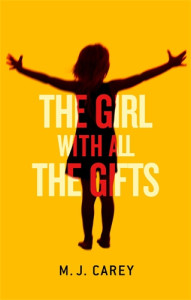 Yesterday, Orbit Books released the cover and first blurb for The Girl with All the Gifts by M.J. Carey. Early impressions (mostly from within Orbit, it seems, and those who’ve read unbound galleys) are extremely positive. Given how far release is, this sort of hype and raised expectations is expected, but, golly, that cover and early teaser blurb are mighty enticing. I generally associate Orbit with their more traditional fantasy and science fiction releases, like Brent Weeks, N.K. Jemisin and Daniel Abraham, but I’m always pleased to see them go out of their way to find quirky, off-the-beaten path genre novels.

Melanie is a very special girl. Dr Caldwell calls her ‘our little genius’.

Every morning, Melanie waits in her cell to be collected for class. When they come for her, Sergeant keeps his gun pointing at her while two of his people strap her into the wheelchair. She thinks they don’t like her. She jokes that she won’t bite, but they don’t laugh.

Melanie loves school. She loves learning about spelling and sums and the world outside the classroom and the children’s cells. She tells her favourite teacher all the things she’ll do when she grows up. Melanie doesn’t know why this makes Miss Justineau look sad.

The first thing to come to mind when reading the blurb for The Girl with All the Gifts is Irrational Games’ Bioshock Infinite, released earlier this year for Xbox 360, PS3 and PC, which features a similarly confined girl, manipulated and educated by her captor in an effort to gain access to whatever secret power lies within her. Most intriguingly, the blurb doesn’t call on any outwardly SFF elements, but there’s just enough of a hint in the final paragraph, and the obvious efforts at guarding Melanie, that, though she might not realize it, and the blurb doesn’t say so, uncovering Melanie’s origins and the threat of her power, even in the body of a young child, will be central to the plot.

M.J. Carey is a pen name for Mike Carey, best known for his work in comic books, including 2011’s crossover series, Age of X , and the Felix Castor novels, which begin with The Devil You Know (buy: book/eBook).

Yesterday won’t be soon enough to get my hands on this book. The Girl with All the Gifts is set for a worldwide release in 2014 from Orbit Books.