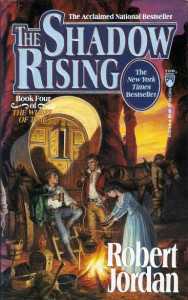 In particular, I found even the first three volumes to contain several annoying features. Among them, average, pedestrian prose, laziness in using quirks and invented stereotypes to describe characters and imagined cultures, and the beginnings of what author/critic Adam Roberts has referred to as “decor-porn.” Despite these annoying narrative features, I was able to enjoy those three volumes as long as I focused on viewing the books as a sort of quest narrative. If I had devoted more time to looking at the numerous “prophecies” and their ilk and tried to predict as-yet-untold events rather than concentrating on the story at hand, I suspect I would have grown bored quicker than I have. END_OF_DOCUMENT_TOKEN_TO_BE_REPLACED