Le Guin is a legendary figure in science fiction and fantasy, author of many classics, such as The Left Hand of Darkness and The Wizard of Earthsea, and a champion for literature’s place in the every changing landscape of modern society — a “realist of a larger reality” is there ever was one. Her acceptance speech rang through the SFF community and beyond, a tolling bell of optimism. Through her ongoing insistence to use fiction as a lens through which we examine ourselves, Le Guin, and writers like her — poets, visionaries, realists of a larger reality — has continued to challenge speculative fiction to be a catalyst for positive change, a limitless medium that can offer hope to a world that obsesses over hopelessness. END_OF_DOCUMENT_TOKEN_TO_BE_REPLACED 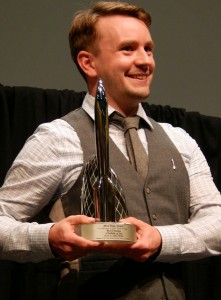 Unexpectedly, I’ll be attending LonCon3, this year’s WorldCon, hosted in London, England. The convention administrators were kind enough to schedule me on some panels during the convention, and so my schedule for the weekend is posted below. If you’re at LonCon3 (and it seems that half of the SFF fans in the world will be there), I hope you’re able to come by for the panels. They’re all very interesting, and my panel-mates include some humblingly intelligent and amazing people. (And some guy named Justin Landon…)

Outside of these panels, I’ll be around the convention floor (well, wherever they allow you to drink beer, at any rate.) So, if you see me, come say “Hi!”

Note: The listed panelists are preliminary and subject to change. END_OF_DOCUMENT_TOKEN_TO_BE_REPLACED

My first thought on the list of nominations for the ‘Best Novel’ was a tepid lack of inspiration. The inclusion of Ahmed’s Throne of the Crescent Moon (REVIEW) is the lone bright spot, and also the only novel from my list of nominations to appear on the final ballot. Redshirts (REVIEW) is entertaining, but no more worthy of a Hugo than a fourth-or-fifth episode of Dr. Who appear in the ‘Best Dramatic Presentation (Short Form)’ category; I’m not surprised to see it there, but I am disappointed that another of Scalzi’s wash, rinse, repeat efforts was rewarded with a nomination. The novels from Bujold and Grant are included, for all intents and purposes, because of the name on their cover, rather than the text inside. I’m sure they’re both fine novels, but neither made waves in fandom or genre discussion this year. Kim Stanley Robinson is another Hugo darling, and 2312 was at least a significant release in Science Fiction, which, alongside David Brin’s Existence (a novel that some will should have been included instead of Robinson’s), reopened a style of hard Science Fiction that has a long legacy in the genre but little recent activity. END_OF_DOCUMENT_TOKEN_TO_BE_REPLACED

Very surprised, and delighted, to see Among Others sitting atop this list. I nominated it, and gave it my top vote earlier in the year, but I expected it to get trampled by A Dance with Dragons, or Mieville. Some consider the novel to be too pandering towards the older generation of fandom, who has a huge impact on Hugo voting, and many they’re right, but as someone who was born after Among Others ended, rose-tinted glasses didn’t have any effect on my perception and enjoyment of the novel; The dreamy Welsh setting did, the starkly drawn protagonist and the tender relationships she built around herself did, but nostalgia didn’t. Good choice, voters.
END_OF_DOCUMENT_TOKEN_TO_BE_REPLACED